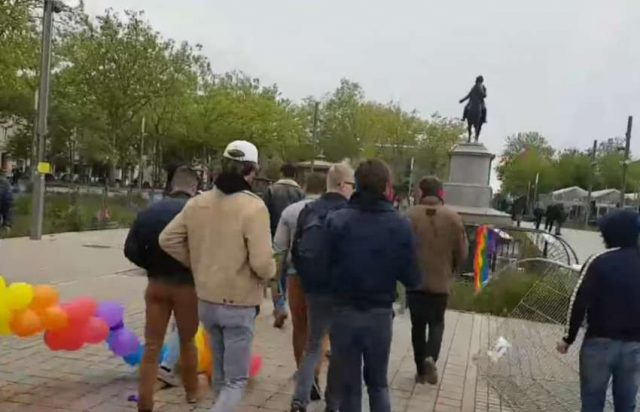 At least 10 students from a Catholic university in France will face disciplinary action for an attack on an LGBTI event.

On Saturday 18 May, about 20 people descended on an event for IDAHOBIT (International Day Against Homophobia, Biphobia and Transphobia). They shouted homophobic slurs and vandalized decorations.

Local group, Centre LGBT Vendée, hosted the event in a public square in , a city in western France.

The protesters shouted ‘homo madness – must stop’ as they smashed the group’s stand.

‘I strongly condemn these stupid, sectarian and regressive actions,’ he wrote on Facebook.

‘These actions, which should be prosecuted by justice, show how important this day (IDAHOBIT) is.

‘Let’s continue together the fight against this scourge.’

One of the city’s most respected universities has admitted it identified 10 of its students in the group of attackers.

The Catholic Institute of Higher Studies (ICES) said 12 of its students were likely involved. It said it had only formally identified 10 of those students.

‘There is in fact in this establishment a handful of activists engaged to the right or very right, which weighs on the establishment and students complain about it. We are poisoned by a minority,’ ICES president, Eric de Labarre, told

Labarre confirmed the students were ‘from first to third year, aged between 18 and 20 years’. Three study law, one studies political science while another studies mathematics at ICES.

He said the students will face a disciplinary hearing and potential expulsion. Labarre argued even though students could have their own opinions, they cannot display them with violence.

‘That young people engaged to the right of the French political chessboard can express themselves, in contradiction with others, that does not bother me at all,’ he said.

‘On the other hand, any violent activity is unacceptable.’

Gay Star News has reached out to Centre LGBT Vendée for comment.