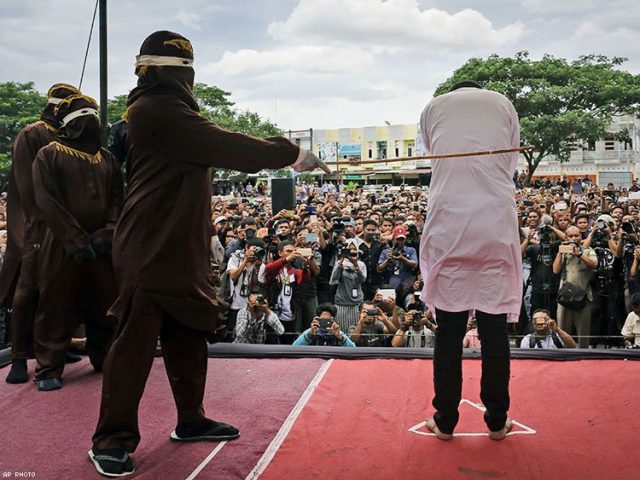 As a large group of bystanders cheered and booed, two young men convicted of engaging in gay sex were caned 83 times each Tuesday in the Aceh province of Indonesia.

Thousands gathered in front of a mosque to watch the brutal beatings, which were carried out by men wearing dark robes and hoods. Abdul Gani Isa, a member of the Acehnese clerics’ council, told the crowd the caning was “a lesson for the public,” according to South African newspaper The Times.

The two men who were flogged — both of whom remained stoic through their ordeal — were caught in March during a raid and were reportedly beaten by police at the time of their arrest.

Homosexuality is illegal in Aceh, which implemented hard-line Sharia law in 2001; homosexuality was specifically added to Sharia crimes two years ago. The Indonesian government allowed Aceh to establish Sharia law as a way to tamp down an insurgency.

The remainder of Indonesia doesn’t explicitly outlaw homosexuality, but the nation’s leaders have found ways to criminalize LGBT people. Two days before the caning, police in Jakarta arrested 141 men in a sauna, saying they violated antipornography and indecency laws. Ten of the men have been charged and could face up to a decade in prison.