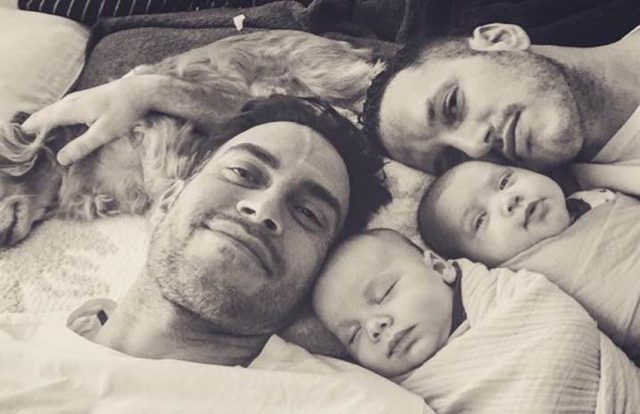 American Horror Story actor Cheyenne Jackson and husband Jason Landau aren’t getting out much these days.

But the new parents enjoyed a rare night out over the weekend when they attended the Trevor LIVE event in Beverly Hills benefiting The Trevor Project.

Their fraternal twins, Ethan and Willow, were born in October and the couple has been in what Jackson describes as a ‘daddy bubble since then.

‘It’s so beautiful,’ Jackson told Gay Star News. ‘It’s every cliche.’
And as any new parent knows, it’s not easy.

‘It all depends on the moment,’ Landau admitted. ‘Do they cry and we have zero idea what to do or why they are crying? Sure.’
Added Jackson: ‘It takes a village, we have family, we have friends and we’re figuring it out.’

The Broadway, film and television star has taken four months off from work to be a stay-at-home dad.

Just two months in, the experience has already changed Jackson’s philosophy on life:

‘Don’t sweat the small stuff because it’s all small stuff. Once you have babies, you can’t f*cking control anything so let it go.’

When there are no words for how tired you are. #twinlife