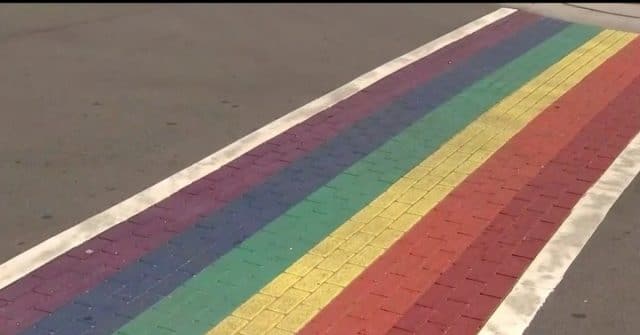 Chicago has marked Pride by painting rainbow crossings on the streets.

Seven of the crossings have been completed so far in Boystown and there will be 14 in total.

The project, paid for with money donated by Chicago Pride Fest and the street festival Northalsted Market Days, will also include a blue, pink and white version to mark the transgender flag.

It is expected to be completed in time for this year’s Chicago Pride Fest, which starts on 22 June.

Stu Zirin, vice president of the Northalsted Business Alliance, an organisation which supports local businesses in the area, told the Chicago Sun Times: “Fifty years ago, it was against the law for homosexuals to congregate. The police would arrest us.

“As we step onto the crosswalks, we have to remember our history and how hard it was — as we look forward to a bright future.”

The crossings also mark the 50th anniversary of the Stonewall riots, an uprising against homophobic police raids at the Stonewall Inn in New York City, which was an milestone in the struggle for LGBT equality.

Stonewall customers threw bottles, coins and other items at the officers as tensions boiled over when those inside the bar were dragged outside by police.

Two transgender women of colour, Marsha P. Johnson and Sylvia Rivera, are credited with with playing major roles in the backlash against police discrimination.

Johnson, known for her activism and advocacy of homeless queer people and sex workers, was one of the first to resist police intimidation at the bar, and Rivera is believed to have thrown the first bottle.