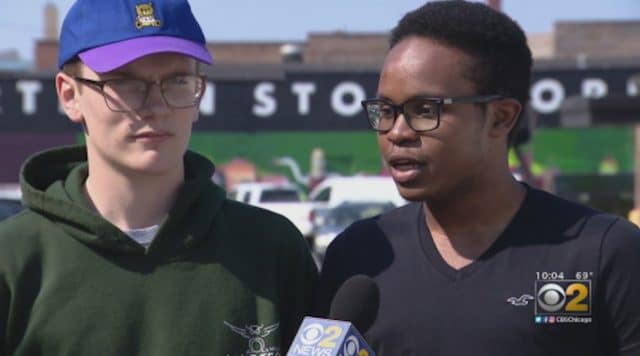 Chicago high school same-sex couple Kendall Anderson and Peder Sevig allege that the cashier of the Big Boy Gyros restaurant kicked them out for hugging. Anderson said that when he hugged Sevig, the cashier said, “We can’t have two guys hugging in here.”

Anderson told Chicago’s CBS News affiliate, “And then [the cashier] said something to the effect of, ‘If it was a guy and a girl it would be OK, but we can’t allow two boys.’”

When the couple and their friends told the cashier they planned to leave, the cashier allegedly responded, “Get out. We don’t want your kind here, anyway.”

Since then, the high schoolers have been encouraging their classmates to boycott the restaurant which is near their school, Lane Tech.

In an e-mail to parents and students, Lane Tech administrators wrote:

Earlier today we were informed of an incident involving some of our students at Big Boy Gyros, 3541 N Western Ave. An innocent display of affection was shared by two young students which prompted a restaurant staff member to shout homophobic phrases at our students. When our students proceeded to leave, he made it a point to share that ‘they’ (LGBT+) were not welcomed.

As a school, we are disheartened because our students were treated with disrespect and made to feel unwelcome. As a community, we stand strong and we want to make it clear that Lane Tech does not stand for discrimination of any kind. We will not tolerate hatred and will not support an organization that promotes hatred of any kind. We support any students, staff and community members that choose to not support Big Boy Gyros. This incident will be addressed in person by Lane Tech’s administration….”

Sadly, this incident is merely the most recent case of a restaurant shaming its LGBTQ customers. There are so many more examples of this kind of thing happening pretty regularly.

Three Gay Men Sue Restaurant For Discrimination, Assault, After Being Physically Thrown Out By Guard