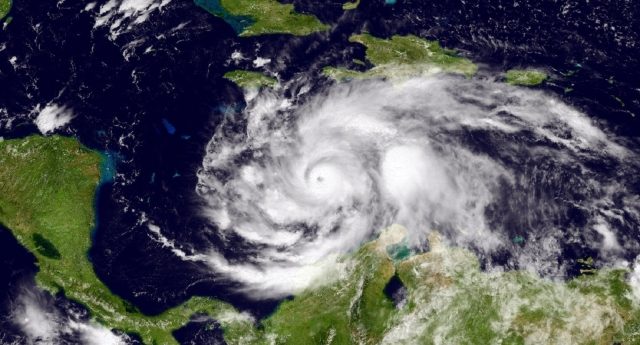 A right-wing columnist has claimed that God sent a hurricane to ravage America because of gay people.

Hurricane Matthew has left a path of destruction across the Caribbean, killing nine people and displacing thousands from their homes in Haiti.

It is heading towards the coast of Florida, sparking warnings of damage.

But one columnist for Trump-backing website Shoebat has claimed that the storm was sent by God to disrupt this weekend’s Orlando Pride celebrations.

Andrew Bieszad wrote: “Florida is a nice place, but it unfortunately has become a lot like California, representing both the best and the worst that America has to offer.

“This is especially true in the area of homosexuality. While there are many conservative and religious Floridians, there are a tremendous amount of sodomites and immoral activity that takes place there.

“Given the serious moral decay of America that we see taking place before our eyes and the increasing disrespect for even the most basic of Christian morality, looking at this storm I began to wonder if perhaps, in some way, it was connected to this crisis.”

He added: “The Bible clearly teaches that in the Old Testament whenever the Hebrews were very disobedient towards God, He would send punishments against them, many times in the forms of natural disasters.

“Christian history also recognizes the same, where God will use His creation to execute judgment against the wicked.

“While not all bad weather is necessarily a sign of sin, both sacred scripture and sacred tradition clearly note that it can be so. Now we know that Florida is an area that is infected with sin, especially cities such as Miami and Orlando, which are veritable dens of sodomy.

“But instead of looking at mere particularities, I thought I would ask a broader question- Is there any ‘homosexual’ activities going on this month in either the Orlando or Savannah areas?

“Sure enough, I found that both Orlando and Savannah are having massive sodomite pride parades this month, especially in Orlando, which is sponsoring this very weekend as the hurricane is about to hit a massive ‘coming out’ parade sponsored no less than with the major support of the city itself and major corporate backers.”

He concluded: “Given America’s love affair with the worst forms of perversity, it is a sign of His anger against us for our obstinate attitude towards sin and refusal to repent for our evil ways.

“You want to stop not this hurricane, but future catastrophes? Then stop sinning, especially with sodomy, as it is one of the four sins in the Bible which cry out to God for vengeance, which we are seeing now.”

It’s unclear what exactly Haiti did to deserve the Hurricane.

Mr Bieszad may get on well with pastor Tony Perkins, who previously claimed floods were “God’s wrath for the legalisation of gay marriage”.

In the UK, local politician David Silvester famously suggested same-sex marriage was to blame for flooding.