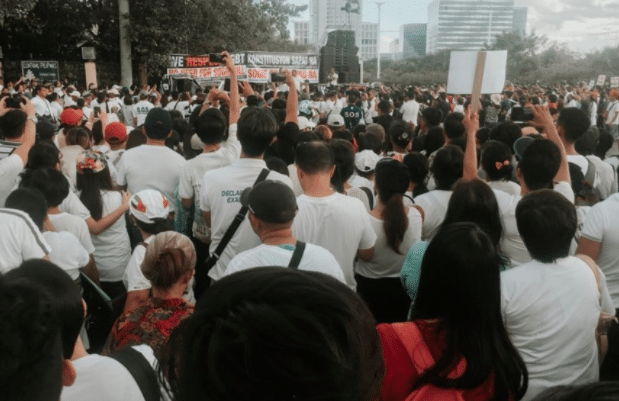 Thousands of Christian protestors have converged on the Philippines’ to protest an anti-discrimination bill that would protect LGBTI people.

Politicians have been working on versions of the SOGIE Equality Act for 20 years and last year it passed the Congress last year with a unanimous vote. SOGIE stands for sexual orientation and gender identity.

But now the bill faces an uphill battle in the Senate after passing so easily in Congress.

Observers are unsure whether it will pass and become law because Senators opposed to the bill have employed delaying tactics to avoid voting on it.

The Coalition of Christians for Righteousness, Justice, and Truth (CCRJT), headed up by Jesus Is Lord (JIL) movement turned up to the Senate on Wednesday to protest the bill.

Thousands of members of various Christian groups troop to the Senate to protest the SOGIE bill. The House already approved it. pic.twitter.com/EIBgGdsfZ5

‘The Bible is so clear about the man marrying another man. This will invite kinds of curses that we cannot contain in our generation.’

The Christian groups said the bill discriminates against people who are against the LGBTI community and is unconstitutional.

No need to change the constitution of the majority for the minority .
Philippines is a nation of God ?#fightforwhatisRight#NotoSOGIEbill pic.twitter.com/HLG1vMK1GU

LGBTI groups in the Philippines spoke out against the Christian groups’ protest.

‘The recent remarks of certain religious organizations during an ambush protest in the Senate is a testament that morality can never be measured through faith and belief,’ the Mujer LGBT organization told Gay Star News.

‘The passing of the SOGIE Bill is not a discriminatory bill to non-LGBT believers, but rather, it is a move towards advancing and strengthening the protection of the underprivileged and most commonly abused members of the society elsewhere.’

The Iloilo Pride Team from the colonial city of Iloilo said Christians were hurting LGBTI people in their own families.

‘”Abomination”, “sin”, “destroys the fabric of the society and family” are words that we have heard countless times as LGBTQ people,’ the Iloilo Pride Team said.

‘Words of hate, discrimination and prejudice from people who are closest to us. Our very own family and religious community. Words uttered because of the lack of SOGIE education.’