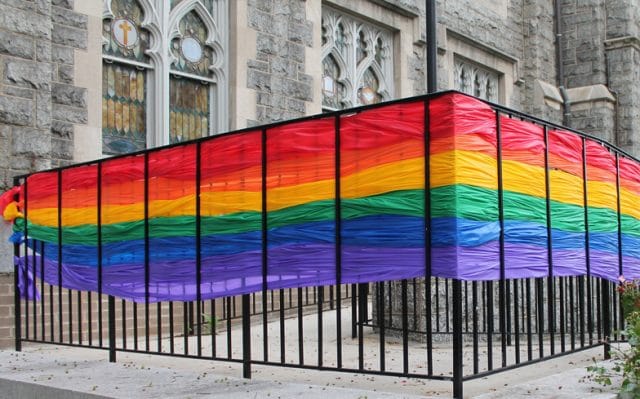 Although same-sex marriages outside of churches has been legal in Scotland since 2014, the Scottish Church’s law hadn’t changed.

However, last week the Church of Scotland’s General Assembly voted by 345 to 170 votes to start changing their laws so same-sex couples can marry in their churches.

The measure was proposed by Rev. Bryan Kerr. Speaking to iNews, Rev. Tom Gordon said: “I have two daughters, both of whom are married. I have one gay daughter in a same-sex marriage.

“When my older daughter got married she had a choice – to ask me to conduct her service as a minister or for me to walk her down the aisle as her dad.

“But when my younger daughter got married, she had no such choice. Give people a choice – allow their marriage to be conducted by a minister. With God’s blessing.”

Even though the vote managed to pass, it only did so under the promise that ministers who did not wish to perform same-sex marriages would be allowed to refuse a request.

However, despite the passing of the vote, the legalisation of same-sex marriages in the Scottish Church is still a while off. The law’s next stage is to go to a legal questions committee in the General Assembly. They have two years in which to respond to the vote, and further stages after that could mean that the law doesn’t come into effect until 2021.

Earlier this year, a study taken at the University of Leeds and York found churches that provide same-sex weddings have seen an increase in their attendance.

Academics found that churches who are able to provide the service are a “positive ‘brand’ for a place of worship,” and that same-sex ceremonies “can provide a vehicle for articulating the broader values of the place of worship to a wide audience.”