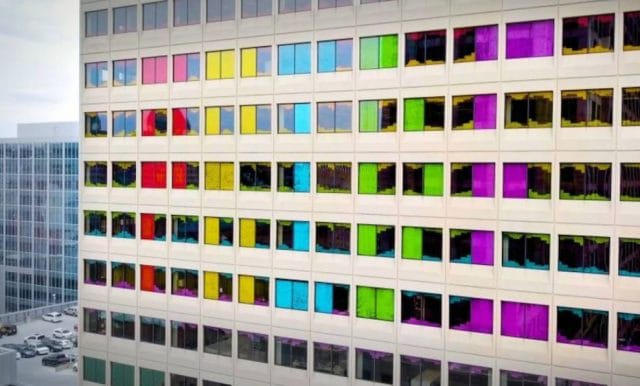 A Cincinnati company is celebrating LGBT Pride Month by creating a mural out of 26,000 Post-it notes tacked on to its skyscraper’s windows to spell out “PRIDE” in the colors of the Pride flag.

More than 100 Cincinnati Bell employees created the mural Wednesday at the company’s headquarters. The mural covered 96 windows on seven stories, extending from the 9th to the 16th floors.

The company posted a video of the mural on Facebook.

“Cincinnati Bell is committed to a supportive environment that encourages every employee to bring their full selves to work,” company CEO and President Leigh Fox said in a release, CNN reports.

“I am so proud of our Pride Employee Resource Group members and their leadership in driving Cincinnati Bell’s Pride Month celebrations,” he added.

The company is also a corporate sponsor of the June 22 Pride parade in Cincinnati.

Cincinnati Bell said it would light up some of its signage using Pride colors, CNN reports.