Home Gay Life City Of Orlando Will Buy Pulse Nightclub And Turn It Into A... 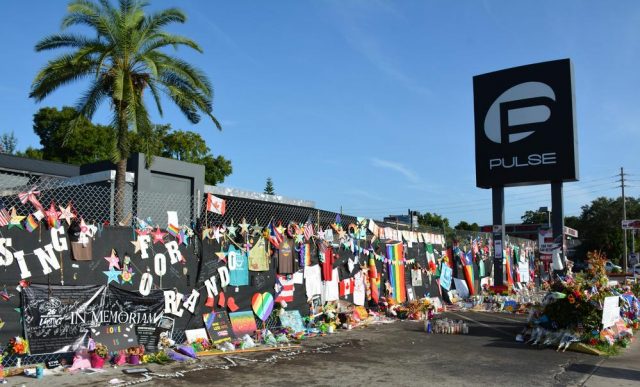 The city will pay $2.25 million to establish a city-owned memorial of the deadliest mass shooting in modern US history. Mayor Buddy Dyer first hinted at the possibility in August.

The city of Orlando has agreed to buy the Pulse nightclub for $2.25 million to establish a permanent memorial, the Orlando Sentinel reports. The city council will vote on the purchase next week.

The club has become a tragic landmark for the LGBT community after a shooter opened fire inside it in June, leaving 49 people dead. ABC News reported that many in the Orlando LGBT community expressed relief at the city’s actions.

Orlando Mayor Buddy Dyer told the Sentinel that the city was in no hurry to alter the club and the tributes left there. A spokesman for the mayor told BuzzFeed News that Dyer himself has lit flowers and left candles at Pulse.

Dyer also said that Pulse would remain in its current state for another 12 to 18 months. The city does not have plans for what shape the memorial will take, but the mayor’s office plans to solicit ideas from both the LGBTQ community and the Central Florida community at large, according to a spokesperson.

Humbled by meeting to Pulse survivors at the most recent Memorial at the club itself. #Orlandostrong #onePulse #loveislove pic.twitter.com/l601Glohpf

Pulse owner Barbara Poma said in a prepared statement that the sale was “very emotional and bittersweet.” As to her and her husband’s reasons for selling the club, she said, “This transaction ensures that what has become a sacred site will be memorialized for generations to come.” She plans to be actively involved with the city’s plans for a memorial, and the mayor’s spokesperson said the city was committed to working with her.

Dyer first spoke about potentially buying the club in August, just two months after the shooting.

At Pulse memorial last night. Lots of people supporting each other. pic.twitter.com/tL3GG7IriU

The price is higher than the club’s appraised value of $1.65 million, the Sentinel reports. Dyer said that it was a compromise between the city and the club’s owners, Rosario and Barbara Poma.

The purchase would give the city authority to secure the property, which has seen thousands of visitors and one break-in since the massacre in June, according to the Sentinel. Originally, a black chain-link fence surrounded the club, but the city replaced it with a screen that featured images by local artists.

Hundreds line up for unveiling of #pulse memorial in #Orlando @citybeautiful pic.twitter.com/l9fPmCyLfi