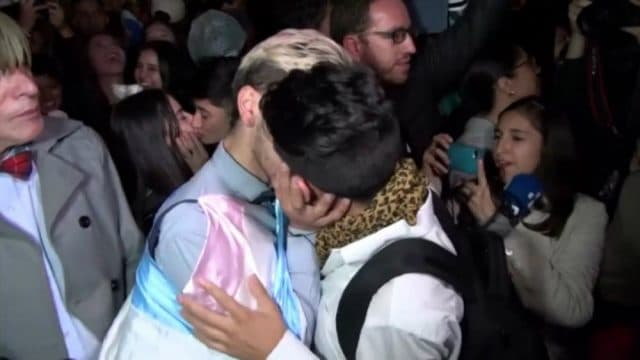 Dozens of same-sex couples took part in a “kiss-a-thon” on Wednesday in Colombia in support of LGBT rights.

The event was held in front of the Andino shopping centre in the capital Bogota, where two days prior a gay couple had been harassed. A man pushed them, screamed profanities at them and accused them of fondling each other in front of children.

The two men, who denied doing anything wrong and said they were only hugging and holding hands, called the police for protection but were instead fined for indecent exposure.

“We want people to stop satanising and discriminating against the LGBT community. We are not sick, we are not an aberration, we are citizens who are here to build a better country,” Esteban Miranda, one of the men who was harassed, said.

Colombia is one of South America’s more liberal countries when it comes to LGBT legislation with same-sex couples allowed to form civil unions and adopt children.

But experts say homosexuality is still perceived negatively by much of Colombia’s population, leading to frequent cases of discrimination.