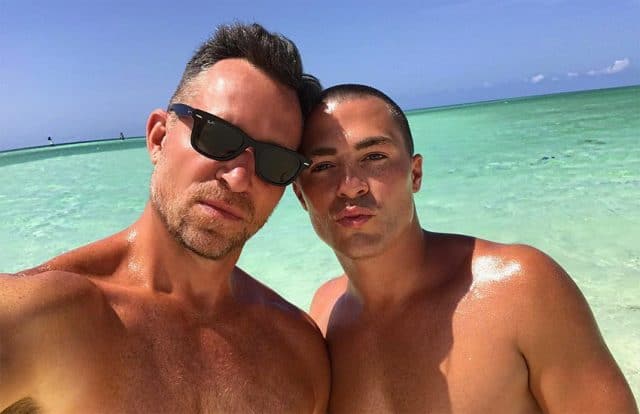 A love story for the ages!

Actor Colton Haynes has revealed how he met his fiance Jeff Leatham.

The 29-year-old, who got double engaged to his florist beau earlier this year, has revealed the pair bumped into each other at a Paris airport.

The Teen Wolf star took to Instagram to pay birthday tribute to Jeff, who is in Paris, and decided to share their cute love story.

He wrote: ‘Since it’s technically @jeffleatham ‘s birthday in Paris right now (his actual bday here is tmrw the 7th)…I’m celebrating him by sharing a little story of how we met…at this very spot.

‘Jeff & I were supposed to meet 4 yrs ago through a set up date from our dear friend @valvogt. I wasn’t in a very good place at the time & we lived in different places so we both decided not to meet (but we did do a little bit of internet stalking and I loved what I saw :)…

‘Flash to yrs later when we happened to randomly run into eachother at the airport lounge in Paris where Jeff hit me with his bag & said “Hey punk…aren’t you Colton?” & after 10 seconds of literal love at first mtg…I responded “Hi Jeff” and couldn’t find words to say cause I was dumbstruck.

‘So after he physically accosted me lol he then carried my bags to the plane where we sat just 3 rows away from eachother. After passing post it notes back and forth & sending Champagne love letters…Jeff asked me to come cuddle with him on the plane & from that day on…my life has forever been changed.

‘There aren’t words to express how kind, loving, beautiful, & talented this man is & im so lucky to get to spend not just his birthday with him…but also life with him. Ur my rock. I love you. Happy Birthday boo bah.’

In other Colton news, the star made his debut in the new series of American Horror Story last night. The episode has won mixed-to-positive reviews.