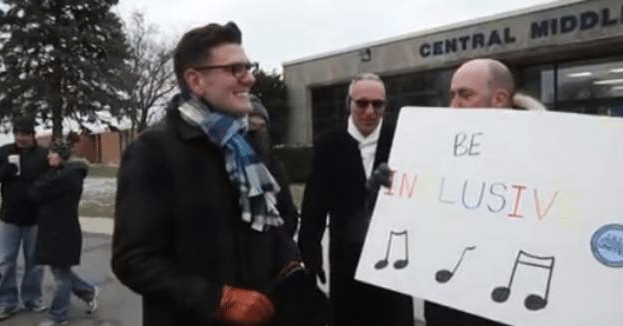 First grade teacher Nathan Etter’s Valentine’s Day surprise from his husband at work is shedding light on one Chicago suburb’s compassion, tolerance, and unwillingness to back down. According to the Chicago Tribune, The Prairie View Grade School teacher was met with comments such as “ewww” and “gross” when his students realized that the flowers he received at work from his husband were indeed from, well, his husband. A man. Two men together. Married even. Hot scoop in elementary school.

It doesn’t take much to floor a first grader, and Etter took his class’ strong reactions as a sign that his students could use a course in Tolerance 101. But his holistic lesson was parlayed from one of his students to a not-so-understand parent, who complained to the school. This led to a sit-down between Etter and his principal, who demanded that Etter stick to the lesson plan.

Now, months later, the teacher’s union as well as community members are backing Etter, claiming that the administration’s intervention was more about Etter’s sexuality and less about him going off-curriculum. Etter officially addressed the school board this week – emboldened by his supporters, and still searching for answers.

We have laid it all out there. The ball is in the district’s court. It is their move as to how they will make their schools safe and accepting. We will see what they do, and then if we have to, we will regroup and go forward… I am not going to let this district in a roundabout way tell me I can’t share who I am.

I will not back down and allow this to be swept underground. I want my voice to be heard. I plan on being open about the fact I am gay. And when appropriate, I will use it as a teachable moment.

The discussion between Etter and school officials will continue into this upcoming week. Needless to say, with media outlets covering the surprising controversy in quiet Kane County, if students didn’t know about homosexuality previously, they sure do now. Do you think that Etter should have kept his personal life out of the classroom, or should the school board have supported his openness with his students?

On Valentine’s day, IL teacher Nathan Etter was delivered flowers from his husband. Some students reacted poorly; Etter decided to make it a teachable moment on respect.

He was reprimanded by his principle. “Stick to the curriculum.”