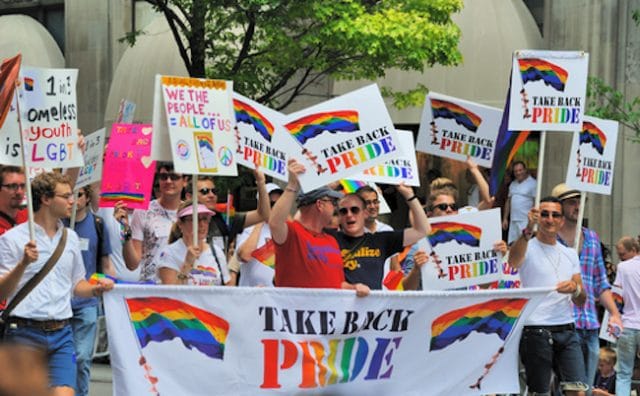 Earlier this month, we reported that the LA Pride parade has been officially cancelled to make way for a march protesting Donald Trump.

Now we’ve learned NYC Pride will also be shaking up its routine to include resistance groups at the very front of the parade.

“I’m extremely proud of the people who came out to raise their voices about this,” says Ken Kidd, the lead organizer who fought tirelessly to get the resistance groups into a highly visible position in the parade.

According to Gay City News, the Sirens Women’s Motorcycle Club of New York City will lead the parade (as they have since 1986), followed by the yet-to-be-announced grand marshals, the Heritage of Pride float, and then the resistance groups, which include members of Rise + Resist, ACT Up, United Thru Action, Gays Against Guns, and other organizations.

After some pushback from Heritage of Pride at a general meeting, members of these resistance groups made it abundantly clear that they’d be participating in the parade with or without HOP’s blessing.

“Our current march route is at capacity,” said Sue Doster, head of strategic planning for HOP. “You can’t add a half million people to that march and keep it safe for everyone.”

“One way or another, these resistance groups are going to take over this parade. I predict that if there is no give here, this will be the first time there will be arrests.”

Ultimately, Heritage of Pride gave them the go-ahead to participate, writing in a statement:

“While no one group owned the resistance hashtag, it was clear that those in the room were capable of rallying peers to take action. This is why we feel confident in enabling the leadership present in those conversations to band together in the interest of reaching their goal of a strong message of resistance to the current political leadership… Recognizing these groups’ request that a strong element of non-celebratory protest be included in the front section of the March, we will place the collective group within the lead section of the 2017 event.”

The news comes at an interesting turning point in the Trump administration. Just this week it’s been reported that the president’s budget proposal calls for a huge cut to AIDS research, an Obama-era executive order protecting LGBTQ federal employees was unraveled, and LGBTQ people won’t be included on the 2020 census.