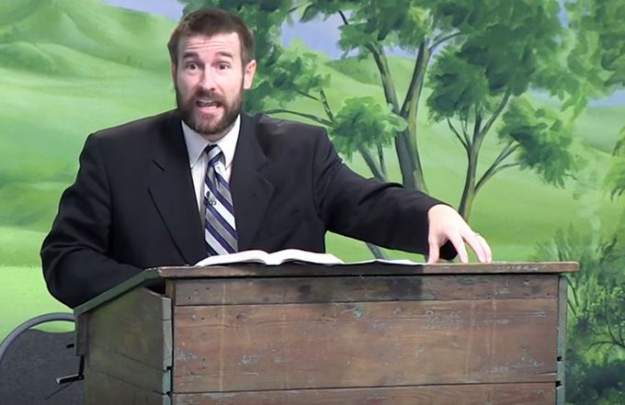 Conservative Christian Pastor Steven Anderson is back at it again, this time around calling for an execution of all gays by Christmas of this year. How lovely.

He echoed something similar three years ago, saying that it would be an AIDS Free Christmas if all the gays were killed.

Steven is a pastor who resides in Tempe, Arizona, where he delivered a sermon at his church stating that gays need to be put to death in the name of God by Christmas Day in an effort to wipe out AIDS, although it’s a very well known fact by now that AIDS is not gay-exclusive. Here’s what he said:

“Turn to Leviticus 20:13, because I actually discovered the cure for AIDS. If a man also lie with mankind, as he lieth with a woman, both of them have committed an abomination: they shall surely be put to death. Their blood shall be upon them. And that, my friend, is the cure for AIDS. It was right there in the Bible all along — and they’re out spending billions of dollars in research and testing. It’s curable — right there. Because if you executed the homos like God recommends, you wouldn’t have all this AIDS running rampant.”

He then went on a tirade about how gays would never be allowed in his church (Not really sure any would want to).

“No homos will ever be allowed in this church as long as I am pastor here,” Anderson declared. “Never! Say ‘You’re crazy.’ No, you’re crazy if you think that there’s something wrong with my ‘no homo’ policy.”

Steven has been an incredibly controversial figure over the years, especially in the rising anti-LGBT movement. He was banned from entering South Africa in late 2016 because of his hate, as well as calling the massacre at Pulse Orlando “good news.”

Why hasn’t he be arrested for his incredibly hate-filled speech as of yet? That’s the question many of us want answered.