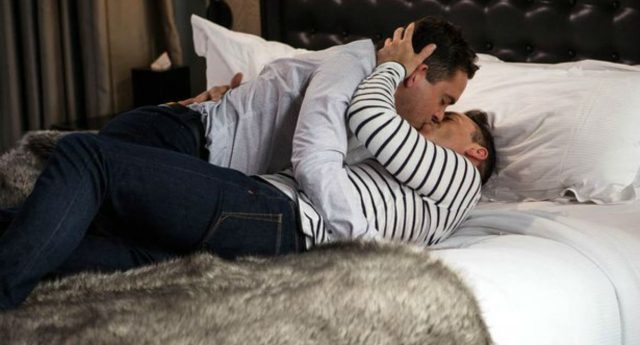 Coronation Street star Daniel Brocklebank has hit back at claims that children are being “disturbed” by seeing him kiss another man on TV.

The Shakespeare in Love actor joined the soap in 2014 as gay vicar Billy.

The storylines have attracted a vast number of complaints, with broadcast regulator Ofcom recently rejecting more than 170 complaints about a gay kiss between Billy and Todd.

Speaking at a Stonewall Season event in Manchester, Brocklebank responded to the claims that the scenes would tramatise children.

He said: “I was horrified by some of the death threats. I had people calling me a child abuser because their children had been in the room watching two men kissing.

“I had messages from people saying their five and six-year-olds were totally disturbed by what they had seen.

“Why their six-year-olds were up at 8.45 PM at night I don’t know. I think they should have been in bed long before that.

“But I spoke to a friend of mine on the phone the following day who has two six-year-olds.

“If there were two heterosexual people on a bed we wouldn’t have had the amount of complaints it’s had especially on social media.

“People find the strength. They hide behind a keypad and they can say things they would never probably say to you in the street.”