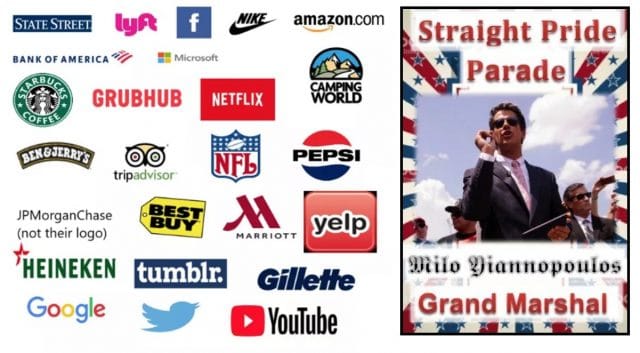 Super Happy Fun America, the group organizing Boston’s so-called “Straight Pride Parade” on August 31, announced it had “initiated negotiations” with 25 major corporate sponsors to partner for the upcoming event, which will feature alt-right provocateur Milo Yiannopoulos as its grand marshal.

The group claimed in an email Tuesday that it was in talks with companies like Amazon, Tumblr, Yelp, Netflix, Starbucks, Pepsi Co., Bank of America, and GrubHub to sign onto the event.

“As corporations with reputations for being both progressive and socially conscious, we are optimistic that they will become part of the team advancing our historic civil rights movement,” Super Happy Fun America writes in the email blast.

Super Happy Fun America announced last month that it had received permission from the City of Boston to hold an event celebrating the “diverse history, culture, and identity” of the heterosexual community. The parade will reportedly include “floats” and “vehicles,” and will trace the same route as June’s LGBTQ Pride Parade.

The application was filed by John Hugo, president of Super Happy Fun America, whose slogan is, “it’s great to be straight.” The group argues that straight people should be “included as equals among all of the other orientations.” They claim the event aims to celebrate “the diverse history, culture and contributions of the straight community.”

Companies like Lyft, Ben & Jerry’s, Gillette, and Facebook refuted the group’s assertion that they were in negotiations to sponsor the Straight Pride Parade and said they would never consider signing onto the event, reports NewNowNext. 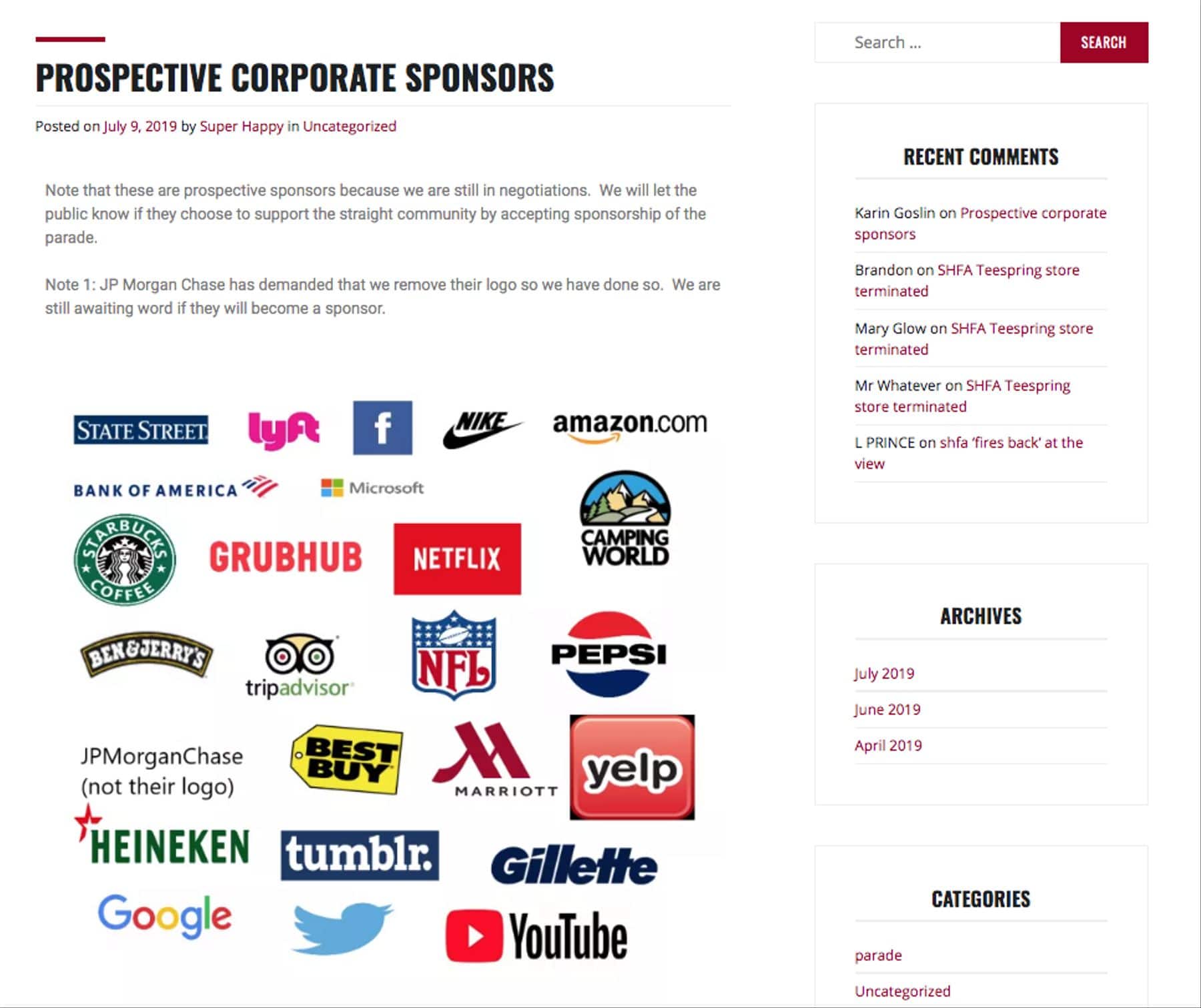 A list of “prospective sponsors” Super Happy Fun America claims they are “in negotiations” with.

Laura Peterson, a spokesperson for Ben & Jerry’s, said she emailed Super Happy Fun America and told them she was not aware of any “negotiations” between the group and the Vermont-based ice cream company.

“I have asked them to remove our name and logo from their website, Facebook page, and anywhere else suggesting otherwise,” Peterson told the news outlet.

“We are not in negotiations and we do not have plans to sponsor ‘Straight Pride,’” Jess Haro-Rodriguez, a spokesperson for Lyft confirmed to NNN.

A spokesperson for Gillette said any assertion that they have been in discussions to sponsor a Straight Pride event is “incorrect.”

A spokesperson for Tumblr said it “has not and will not have any discussions” with its organizers.

Actor and Oscar-winning producer Brad Pitt had threatened to sue the event’s organizers last month after they named him the official mascot of the celebration.

The group had listed Pitt as a mascot on their website along with images of the actor.

“Congratulations to Mr Pitt for being the face of this important civil rights movement,” the website stated.

According to TMZ, sources close to the actor said he had not been approached to back Straight Pride and that he didn’t agree with its beliefs.

TMZ said Pitt’s representatives threatened to sue the group if they didn’t remove his image and association with Straight Pride.

According to the Independent, the event’s organizers are heavily linked with far-right movements and nationalist protests.

Hugo and the group’s vice president, Mark Sahady, are both associated with Resist Marxism, which the Independent calls a far-right group with links to white supremacist organizations. Hugo also unsuccessfully ran for Congress last year and was endorsed by the group.

Sahady also allegedly organized a right-wing Free Speech Rally and Rally for the Republic in Boston, the news organization reported. The rallies occurred after the August 2017 Unite the Right rally in Charlottesville, Virginia, where a counterprotester was killed.