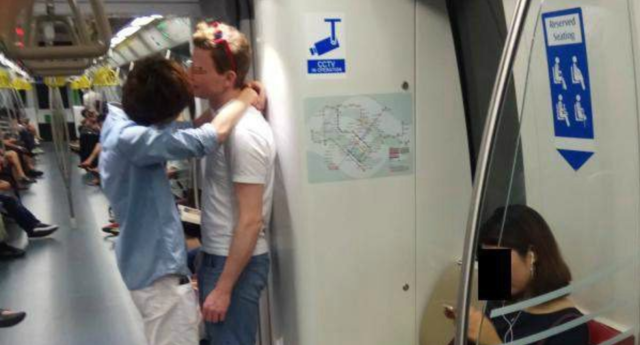 A gay couple have faced homophobic abuse after an anti-gay article went viral in Singapore.

An image, which shows the couple kissing on a Metro train in Singapore, was at the centre of a homophobic option piece written on a local news site. Melinda, the writer of the homophobic article, shared the image after she was ‘disgusted’ by the couple.

She wrote: “I respect everyone’s rights, but this is simply disgusting in a public space.

“What if my children saw this and asked – mummy, why are the two men kissing? Would I have to answer and say it’s the same as normal love and marriage, the only difference is that one man opens his buttocks for the other man to put his private part inside but in the end no babies come out, they only get AIDS!

“Most people in Singapore already know they exist but would prefer that they just go back inside the closet and stop seeking attention.

“What more do they want? Gay sex parties? Gay parades? To be able to teach kids about gay sex? Homosexual relationships are not normal and therefore will never be equal to a real marriage between a man and a woman,” she added.

“It seems that we really need sex policemen like Mr Chan and stricter laws to keep the urges of the gay community in check. The gay minority can do whatever they want in their bedroom but they should not be going around promoting the gay lifestyle and demanding for gay marriage.

She went on to write that they “should be thankful that they have their annual Pink Dot,” before adding that she didn’t show their faces “out of kindness.”

The article has since been shared over 80,000 times on Facebook.

The abusive article came to the couple’s attention because of how viral it became.

It has caused Peter Eggenhuizer a great deal of stress and anxiety. “I felt mortified and violated,” he said.

“To rub salt into the wound, the author went on to attack my act of love and affection. But I feel the need to rise above it and raise awareness that this is unacceptable.

Homosexuality is illegal in Singapore, but the country has a supportive LGBT community.

“In many countries homosexuality is still illegal and this could have real and dangerous consequences. I will continue to spread my love and do it my way. Spread love, not hate,” Eggenhuizer added.

Human rights groups recently slammed Singapore for a clamp down on foreign sponsorship for the Pride event, Pink Dot.