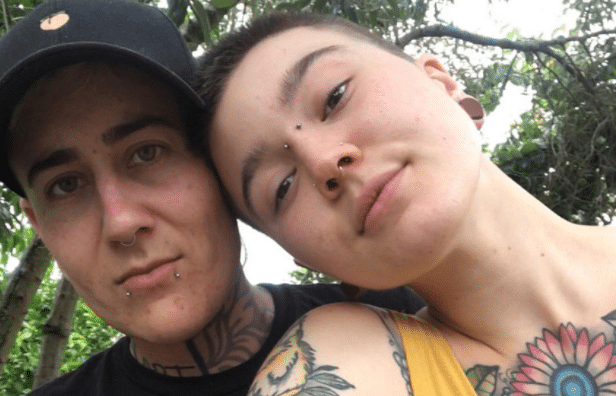 A couple in Australia say their New Year celebrations were ruined by a fellow passenger aboard a Melbourne to Perth flight.

Cat Franke, 23, and Julz Evans, 26, were on the night flight to visit family.

Franke, a cosmetic tattooist and model, took to Facebook to explain what happened.

She said that the man sat directly behind her transgender partner was behaving erratically.

‘The man started off by keeping his hand on the top of my partner’s chair, then when I tried to share a kiss with my partner he pressed his face right up to the gap between our two chairs and started mumbling “kiss, come on I wanna see some lesbians kiss”.

‘My partner and I felt so uncomfortable because of this pervert we immediately stopped our conversation and sat as still as possible, hoping he would leave us alone. 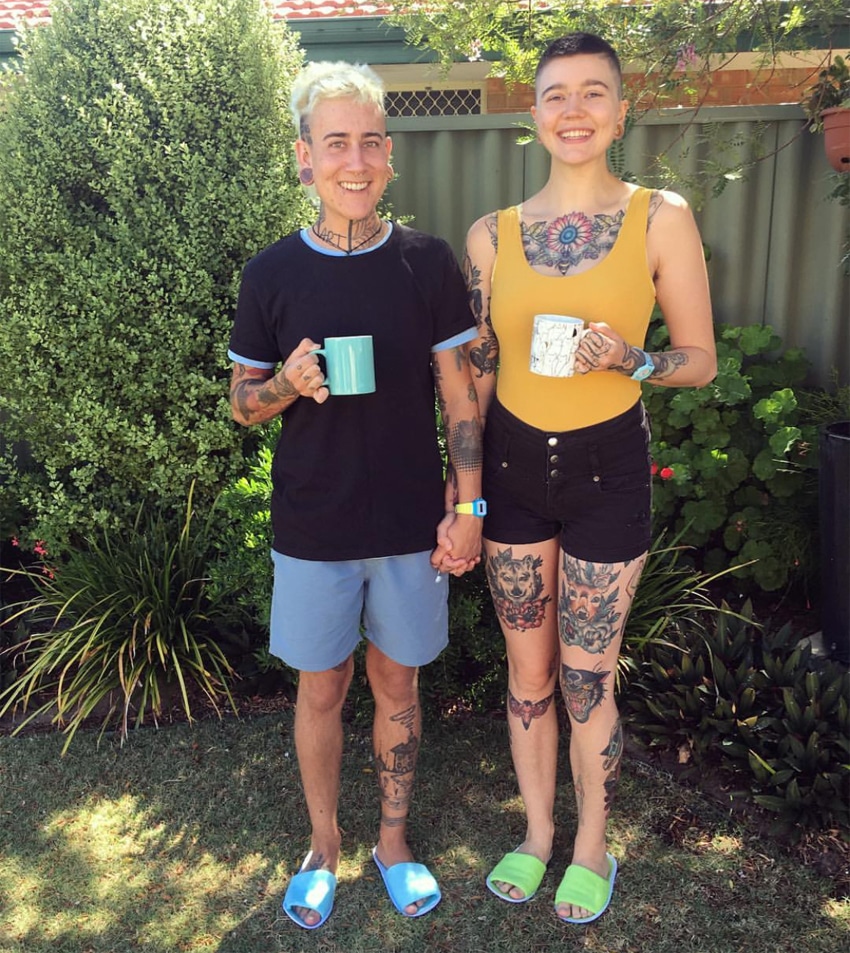 ‘Unfortunately because we had not met his request he began his homophobic slurs, singing loudly and also mumbling about how we were faggots, dykes and poofters. He then began to kick and punch my partners chair while saying how we weren’t equals and rambled about his beliefs about marriage.

‘It was clear that the man had been drinking heavily before the flight, yet your staff continued to accept his money for about 5-7 drinks and he became so intoxicated he could barely walk straight or follow instructions. You could imagine how much this helped with his filter.

‘I feared for mine and my partner’s lives on that plane, we were physically trapped with someone who wanted to hurt us and make sure we had a terrible time.

‘When I spoke up to ask him to stop, he only got more aggressive and louder with his homophobic hate speech and began boxing the back of my partner’s chair. The punching continued for hours and my partner could not lean back against their seat. They had to lean forward against the seat in front, even upon landing.

‘Your staff were aware of his behavior and did absolutely nothing to even try to help the situation. When I mentioned it to the crew about how he was terrorizing us the whole flight and felt we couldn’t speak up without him getting worse as we were leaving the plane your crew replied with “oh I’m so sorry, he was making comments to me too.”

‘Your staff had been receiving abuse from him too yet failed to do anything about him other than giggle at his drunkenness.

‘My partner and I had not done anything to deserve to have such verbal abuse and hate spat at us. We sat there in silence unable to communicate or even hold hands over the New Year’s Eve flight out of fear of being physically harmed as well. I started off my year shaking and in tears from fear and from how much the verbal abuse had hurt me.’

Jetstar: ‘We don’t tolerate discrimination of any kind’
Responding to a media inquiry from The Age, a Jetstar spokesperson said staff had not considered the man to be intoxicated.

‘Our crew are trained to identify whether passengers are intoxicated and in this instance, our crew do not believe this passenger was.’ They said the passenger concerned was only served three drinks.

They said staff had only been made aware at the end of the flight of the situation.

‘Our crew were made aware at the end of flight that derogatory comments had been made.’ They said staff had been ‘appalled’ to hear of the incident and, ‘We don’t tolerate discrimination of any kind.’

They said they have policies in place if they had been made aware during the flight.

Jetstar has issued AUS$50 to each woman in compensation for their experience. Franke thinks it’s not enough and wants a full refund for the flight.

‘[Staff] giggled at him like he was a joke,’ she told The Age, ‘and he continued his rampage.’

She said she also wants the man blacklisted from future Jetstar flights.

‘I don’t want him to make anyone else feel like that.’

GSN has reached out to Franke and Evans for further comment.

In a statement to GSN, a Jetstar spokesperson reiterated, ‘Our crew were made aware at end of flight that derogatory comments had been made, and have submitted an internal report which is currently being investigated.’

They added, ‘Jetstar as part of the Qantas Group is an inclusive and diverse workplace, and an active supporter of the LGBTIQ community.’