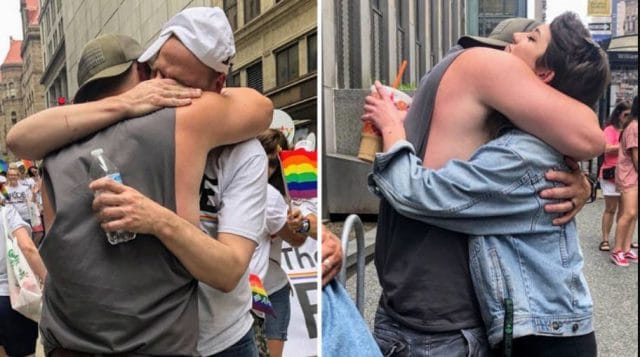 A father who wore a “Free Dad Hugs” T-shirt to the Pittsburgh’s Pride Parade last weekend shared what it was like to embrace kids who had been rejected by their parents.

In a viral post shared to the Love What Matters Facebook page on Monday, Howie Dittman, 44, explained that he and few friends showed up to the parade that day wearing T-shirts that read “Free Dad Hugs” and “Free Mom Hugs.”

Some were super happy hugs. But others were like these two… and there were way too many like them.

Let me tell you about these two.

He was kicked out at 19 when his parents found out. They haven’t spoken to him since. He cried on my shoulder. Sobbed. Squeezed me with everything he had. I felt a tiny bit of that pain that he carries with him every minute of every day. He was abandoned because of who he loves. And on June 9th, 2019, he was participating in a celebration of love when he was brought to his emotional knees by a shirt that said “FREE DAD HUGS” on a complete stranger.

Her story? I don’t know the specifics. But I know that she saw me from across the street. I wasn’t paying attention. By the time she got to me, she had tears in her eyes. She stood in front of me and looked up at me, with a look of sadness and helplessness that I’ll never forget. She hugged me with everything she had. And I hugged her back. She held on for so long, melting into me, and thanked me endlessly. And I can’t stop thinking about her. What she must be going thru with her family… the ones who are supposed to be there for her no matter what. Who does she go to when she needs advice on love, money or just life? Who does she share old memories with that only her parents would have been there for? What are her holidays like? How often does she hope for that phone call, with unconditional love on the other end? I don’t know her story. But it doesn’t feel like a huge leap to assume she’s lost those who should love her the most and forever.

Imagine that, parents. Imagine that your child feels SO LOST FROM YOU that they sink into the arms of a complete stranger and sob endlessly just because that stranger is wearing a shirt offering hugs from a dad. Think of the depths of their pain. Try to imagine how deep those cuts must be.

Please don’t be the parent of a child that has to shoulder that burden. I met WAY too many of them, of all ages, today.

And if by chance anyone knows these folks, please let them know they can reach out any time they need a surrogate dad to talk to. I’ll be there.

“You go in thinking you’re just going to put a smile on a few peoples faces, and you come out knowing or understanding their struggle,” Dittman told CBS News about his participation in the free hugs event. “It was life-changing, it really was.”

“My first thought was, I’m thinking the rate of rejection from fathers is probably higher than mothers,” Dittman told the news outlet. “I can give dad hugs.”

Dittman said he has received over 1,500 messages since the post went viral.

He said one individual wrote him on the “day that they saw the post was going to be their last day on earth.”

LGBT youth who come from highly rejecting families are 8.4 times as likely to have attempted suicide as LGBT peers who reported no or low levels of family rejection, according to The Trevor Project, a non-profit organization focused on suicide prevention for LGBT youth.

Dittman is the founder of Helping Butler County, a local volunteer group with nearly 4,000 members and the goal of helping those in need.