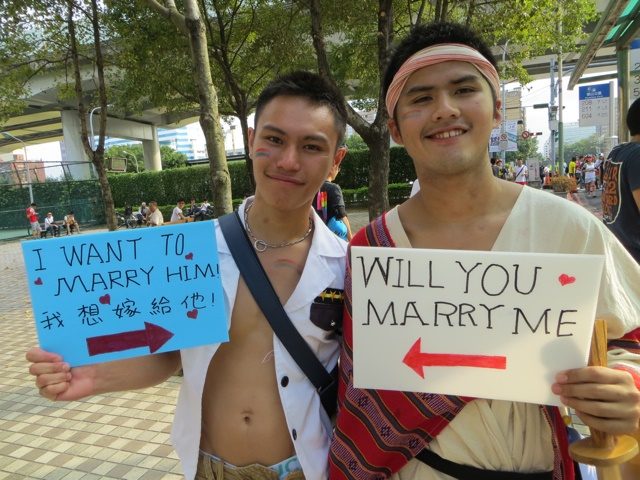 On Oct. 16, Jacques Picoux died after falling from the 10th floor of a building in Wenshan District, southern Taipei.  The investigation into his death continues, but police have not found any signs of a struggle are leaning toward the fact that Picoux may have committed suicide.

There is definitely more to this story, this death, and how it tie into Taiwan’s marriage equality fight.

The sudden death of a well-known French professor in Taiwan, whose partner recently died from cancer, has led to calls for the Tsai Ing-wen (蔡英文) government to make good on promises to legalize same sex marriage.

Local gay rights activists have connected Picoux’s death to the recent passing of his long-time partner Zeng Jingchao (曾敬超) and their struggle to legalize their relationship. The two were together for 35 years. Lee Yen-jong (李晏榕) was the Green Party-Social Democratic Party Alliance legislative candidate in the January elections. In a December 2015 Facebook post, she detailed how the lack of gay marriage laws in Taiwan affected the couple after Zeng fell ill.

The legal status of their relationship meant that after Zeng was hospitalized, Picoux was not allowed to be involved in any of the decisions about Zeng’s treatment, Lee said. While Zeng’s family decided that he should undergo “extreme treatment,” Picoux, who believed Zeng would not want to prolong his suffering, opposed this course of action. The hospital did not acknowledge Picoux had a formal relationship with Zeng.

Zeng also planned to leave the apartment that the couple lived in to Picoux, Lee says. However, Zeng’s family and their lawyers changed his will, and the apartment was subsequently transferred to the family.

Picoux, identified as a “stranger according to the law,” was unable to influence either decision, Lee says.

Picoux said his last wish was to have his ashes scattered with his boyfriend. – thenewlens.com

To read more about the fight for marriage equality in Taiwan, head over to the full article on thenewlens.com.

There was hope that change would occur, especially after the elections in January and Taiwan would be the first Asian country to legalize same-sex marriage.

Cheng Chi-wei (鄭志偉), director of social and volunteer work at the Taiwan Tongzhi Hotline Association, has called on President Tsai to respond to the issue.

Cheng told the Chinese-language United Daily News that Tsai said she would support gay rights during her election campaign but neither she, nor officials, have taken action on the issue.

Cheng believes that as the leader, Tsai is responsible for making same-sex marriage legal.

Gay marriage supporters are calling for others to join the Taiwan Pride parade to support same-sex marriage and commemorate the death of “Professor Bi.” The parade, the largest in Asia, will be held on Oct. 29 in Taipei.  – thenewlens.com We will be watching the parade and we hope the celebration will be wonderful, safe, honorable, and without incident.