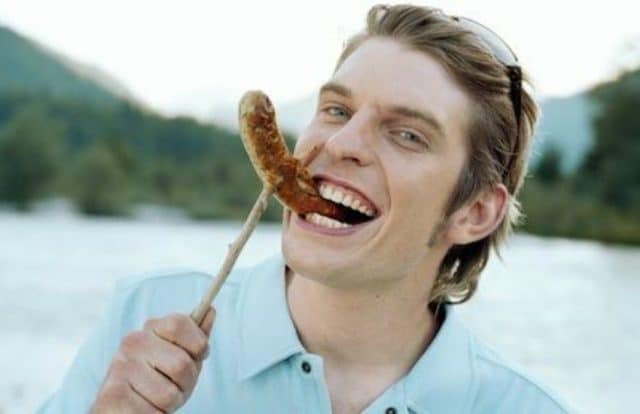 ‘Democracy sausage’ was the 2016 Australian Word of the Year

An Australian tradition is being brought to the campaign for marriage equality and it might help get the ‘yes’ votes over the line.

Australia is holding a non-compulsory post survey on marriage equality, with people having the option of sending their postal forms back if they choose to.

Usually, voting at federal and state elections is compulsory in Australia. Some time ago a tradition was born where polling stations hosted ‘sausage sizzles’, as a kind of reward for participating in democracy.

At a sausage sizzle you can get your hands on a tasty ‘snag’. A snag is an overcooked cheap sausage, served in a folded slice of white bread and tomato sauce (Australia’s version of ketchup).

They have become such a big part of voting in Australia that they even got their own emoji. The term ‘democracy sausage’ was born and was even named Australia’s Word of the Year in 2016.

Some crafty minds have married the democracy sausage tradition with a campaign to remind people to post back their postal survey forms.

Snags for Equality Weekender will be an Australia-wide event and will be serving ‘equality sausages’.

Organizers are ‘asking Australian venues, businesses and backyards to fire the barbie in honour of the long-lost sausage sizzle that used to accompany voting for anything in our great outback nation’.

LGBTI event company, Heaps Gay, together with the Equality Campaign were the brains behind Snag for Equality Weekender.

‘We know people love the tradition of a democracy sausage in a school playground after voting,’ said Heaps Gay director, Kat Dopper.

‘We didn’t want this postal survey, but we thought we should make the best of it. We know about 57.5% of Aussies have voted so far– so we thought having a sanga would be a nice way for people to remind their friends and rellos (relatives) to vote.’

People are invited to host their own Snags for Equality event anywhere in Australia.

Sydneysiders are even luckier with a free street party and concert planned for Sunday. It will feature some of Australia’s most loved performers.

‘This party, and our campaign, is an invitation for all Australians to join together in shaping our nation as a place that truely celebrates our national values of fairness and equality,’ Australian Marriage Equality co-chair Alex Greenwich told Junkee.

‘This is a big thank you to our dedicated campaigners and volunteers, but it is also a reminder that we haven’t won this yet. Millions still need to return their postal surveys with a YES.’