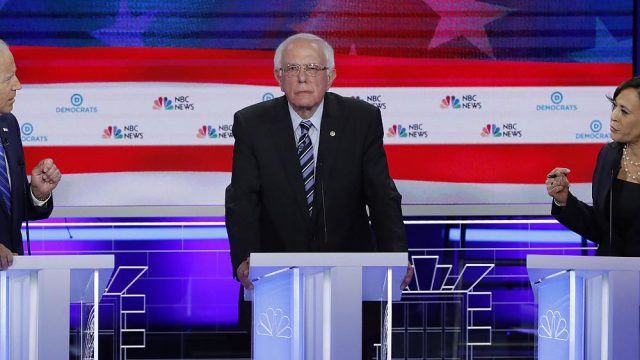 Joe Biden, the Democratic frontrunner to challenge Donald Trump in the November 2020 US presidential election came under fire for his record on race on Thursday.

In a TV debate among 10 of the 20 Democratic candidates, Kamala Harris confronted Biden on his past work with segregationist senators and for having opposed a policy to push for diversity in schools.

Mayor Pete Buttigieg of South Bend, Indiana, also faced questions about accusations of racism within the city’s predominantly white police force in the aftermath of a fatal police shooting of a black man in South Bend earlier this month.

Harris, who is the only black candidate among the 20 Democratic candidates said to Biden “I do not believe you are a racist. And I agree with you when you commit yourself to the importance of finding common ground.

“But I also believe and it’s personal and it was hurtful to hear you talk about the reputations of two United States senators who built their reputations and career on the segregation of race in this country.”

Biden, a former vice president, defended his record on race and past work with segregationist senators.

“It’s a mischaracterisation of my position across the board: I did not praise racists. That is not true,” he said. “If we want to have this campaign litigated on who supports civil rights and whether I did or not, I’m happy to do that.”

“Everything I have done in my career, I ran because of civil rights and continue to think we have to make fundamental changes and those civil rights, by the way, include not just African-Americans, but the LGBT community,” Biden said.

Aside from Race, the 10 candidates turned to how to tackle Trump in next year’s presidential election.

While candidate Eric Swalwell, 38, urged 76-year-old Biden to hand over the tourch to younger contenders.

Biden responded “I’m still holding onto that torch. I want to make it clear.”

Biden, who is making his third run for the White House, said tax cuts for the wealthy and other economic policies by the Trump administration were increasing inequality in the US.

Thursday’s Democratic TV debate was the second that followed Wednesday’s debate with 10 other candidates.