MIAMI (Reuters) – Democratic presidential contenders battled over healthcare coverage and border policy on Wednesday during a surprisingly heated first debate that laid bare the party’s divisions on whether to abolish private insurance and shift to a Medicare-for-All system.

In the first round of back-to-back debates, several of the lesser-known candidates vied for attention in the crowded race to take on Republican President Donald Trump, shouting over one another to grab the spotlight and prove they are capable of standing up to Trump in the November 2020 election.

All 10 Democratic contenders on stage repeatedly attacked Trump, saying his economic policies benefited the wealthy at the expense of working Americans, and calling his border policies heartless.

But they also turned their fire on each other frequently, most often targeting Beto O’Rourke. The former congressman tangled with former Housing Secretary Julian Castro, a fellow Texan, on border policy, and New York Mayor Bill de Blasio on healthcare.

No one mentioned front-runner Joe Biden, who will take the stage with top rival Bernie Sanders and eight other candidates in the second debate on Thursday night.

The battle over healthcare began when the candidates were asked to raise their hands if they support eliminating private health insurance. Only U.S. Senator Elizabeth Warren and de Blasio did so, but they quickly challenged the other eight candidates on stage.

Warren, a leader of the party’s progressive wing who has been surging in opinion polls, said private insurance was taking advantage of Americans. She backs a government-sponsored Medicare-for-All approach and criticized those who say it is not politically feasible.

But former U.S. Representative John Delaney, an outspoken critic of Medicare for All who supports a universal healthcare approach that includes private insurance, said Democrats should not throw away a system that some Americans are happy with.

After years of defending former Democratic President Barack Obama’s landmark healthcare law known as Obamacare from Republican attempts to repeal it, Democrats have struggled during the campaign to agree on the best approach to fixing it.

The Medicare for All approach pushed by Warren and Sanders, which has gained support in Congress, would create a government-operated plan that eliminates private insurance. It is modeled on the Medicare government healthcare program for seniors.

O’Rourke said private insurance was “fundamental to our ability to get everybody cared for,” but de Blasio cut him off.

O’Rourke said that as a congressman he helped introduce a bill that would ensure that those who are seeking asylum and refuge in the United States are not criminalized.

Castro responded: “I’m not talking about the ones that are seeking asylum, I’m talking about everybody else.” He accused O’Rourke of not doing his homework.

Trump hinted he would not tweet his reactions to the debate live. It was taking place as he flies aboard Air Force One to Osaka, Japan, for a G20 summit.

“This debate was the best argument for President Trump’s re-election and should really be counted as an in-kind contribution to the President’s campaign,” Kayleigh McEnany, the Trump campaign’s spokeswoman, said in a statement.

The debate was an opportunity for some of the less-noticed candidates to step out of the shadow cast by Biden, a former vice president, and Sanders, a senator from Vermont.

U.S. Senator Cory Booker had the most speaking time in the debate at about 11 minutes, according to the New York Times and other media trackers. He was followed by O’Rourke, Warren and Castro. Washington Governor Jay Inslee had the least.

The intensity of the exchanges among the Democrats after six months of a relatively mild campaign reflected the high stakes in what could be a make-or-break moment for some of the contenders struggling to be noticed in the field of more than 20 candidates.

Inslee said he was the only candidate on the stage that had passed a public healthcare option and a law protecting a woman’s right to reproductive health and health insurance. 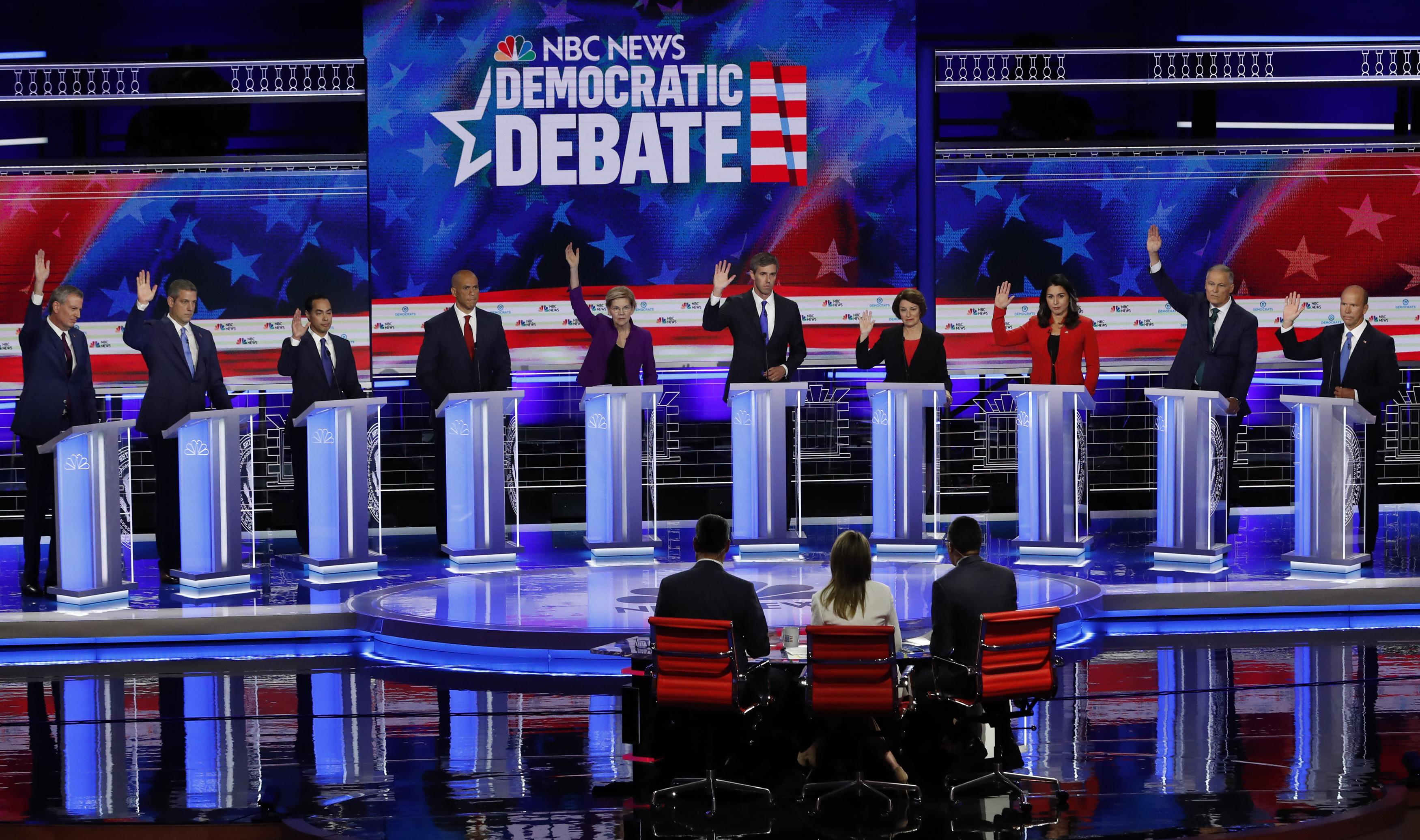 That drew a sharp response from U.S. Senator Amy Klobuchar.

“There are three women up here who have fought pretty hard for a woman’s right to choose,” she said, looking at Warren and congresswoman Tulsi Gabbard.