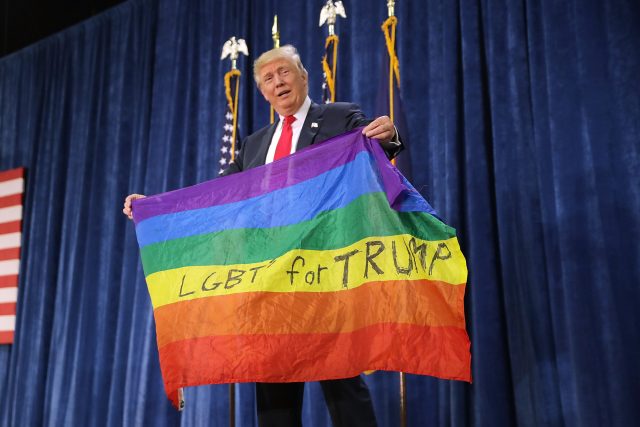 The Trump/Pence administration is continuing it’s assault on the LGBTQ community as the Department of Health and Human Services has proposed a new, extremely narrow definition of ‘sex’ that would virtually erase the existence of 1.4 million transgender Americans.

The move would exclude transgender people from federal non-discrimination protections.

From The New York Times:

The Department of Health and Human Services is spearheading an effort to establish a legal definition of sex under Title IX, the federal civil rights law that bans gender discrimination in education programs that receive government financial assistance, according to a memo obtained by The New York Times.

The agency’s proposed definition would define sex as either male or female, unchangeable, and determined by the genitals that a person is born with, according to a draft reviewed by The Times.

“Sex means a person’s status as male or female based on immutable biological traits identifiable by or before birth,” reads the memo that has apparently been circulating since spring. “The sex listed on a person’s birth certificate, as originally issued, shall constitute definitive proof of a person’s sex unless rebutted by reliable genetic evidence.”

According to reports, the HHS Department is also trying to persuade the Departments of Education, Justice and Labor to adopt the policy in an effort to provide a more unified front in the certain-to-be-filed lawsuits.

“Defining ‘sex’ in this narrow language tailored to the talking points of anti-equality extremists is part of a deliberate strategy to eliminate federal protections for LGBTQ people,” added Griffin. “This is a direct attack on the fundamental equality of LGBTQ people and, if this administration refuses to reverse course, Congress must immediately take action by advancing the Equality Act to ensure that LGBTQ people are explicitly protected by our nation’s civil rights laws.”

The HRC suggests the administration’s policy change could have drastic consequences for LGBTQ people across the federal government. For example:

• Same-sex couples and their families could be turned away from emergency shelters
• A transgender person could have their insurance deny them coverage for transition related care
• A gay man could be harassed about being gay at a job skills training
• An elderly same-sex couple could be denied in home meal service
• A transgender woman could be turned away from a hospital for a broken ankle
The answer to all of this would be the passage of The Equality Act which adds clear, comprehensive non-discrimination protections for LGBTQ people to our nation’s civil rights laws.

The legislation has 246 cosponsors in Congress, and 117 major corporations have announced their support.

LGBTQ discrimination is a real and persistent problem in the U.S.

LGBT leaders and allies took to social media this morning to condemn the proposed policy change.

Trump Administration Eyes Defining Transgender Out of Existence via @NYTimes
Fk These Ppl.Will MY SON Be Sent To INTERNMENT CAMP 2 Live with LATINO Children,& Be Kept In Cages in Places where??Cant See Them.THIS IS”HIS CODE”4,..MAKE THEM DISAPPEAR #MBS https://t.co/UrXYSo5vK5

If you walked past Jaimie on the street, you’d probably take him for an all-American heartthrob; muscular build, deep blue eyes & casual scruff. You’d probably never guess that he’s a TRANSGENDER MAN.

Anyone else care to remind us how much of a “friend” to #LGBTQ people @realDonaldTrump is? Not only is this insulting, inhumane, and unacceptable, but it also flies in the face of THE LAW. https://t.co/BD5y7me0rI

The Trump Administration “Eyes Defining Transgender Out of Existence,” at a moment when transgender Americans face high levels of discrimination and violence. Outrageous and wrong to lessen protections and attempt to deny equal humanity: https://t.co/KsWxnvQpPG