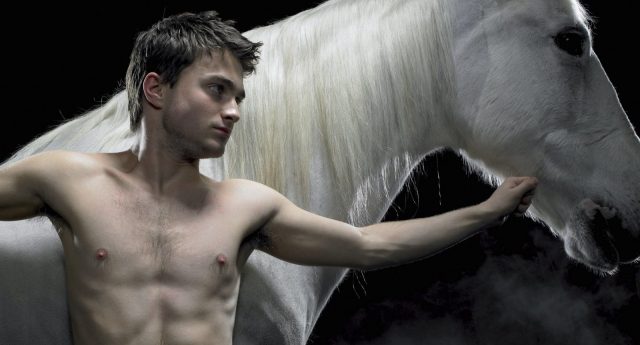 Daniel Radcliffe caused quite the stir when he played gay poet Allen Ginsberg in the film Kill Your Darlings – and now the behind-the-scenes secrets have been revealed.

The film included an explicit sex scene with Ginsberg, played by Mr Radcliffe, in which he lost his virginity to another man he’d met in a bar.

Now the director, John Krokidas, of the film has exposed what really happened as the two guys got it on in the steamy film shoot.

“I remember going, ‘Oh shit: You’re British, and Allen Ginsberg is one of the most famous Jews of the 20th century,’” Krokidas recalled.

“And Dan said, ‘John, my mother’s Jewish and I’m circumcised. Play the scene any way you want.’

“God bless Daniel Radcliffe, he commits to all of his actions.”

Daniel Radcliffe previously explained his understanding of that scene – as gay sex (or more specifically bottoming) was explained to him.

“I was talked through it by the director.

“He would be telling me what I would be feeling in each take,” he told Flaunt.

“Basically, gay sex, especially for the first time, is really f***ing painful. And [Krokidas] said that he had never seen that portrayed accurately on film before.”

Director Krokidas was keen that the film would accurately portray the issues, meaning he put a lot of effort into training the former Potter star to understand his subject.

“Growing up with queer films, there was always some sort of stigma attached to gay characters or gay sexuality, and I didn’t want the sex scene to feel like that in any way,” Krokidas said.

He called the poet, Ginsberg, “one of the most renowned gay artists of the 20th century”.

“I felt that not including his sexuality as part of the story would be a crime.

“He wore it unabashedly on his sleeve and helped establish queer sexuality as something you could even talk about in art and literature, so the scene was incredibly important to capture right.”