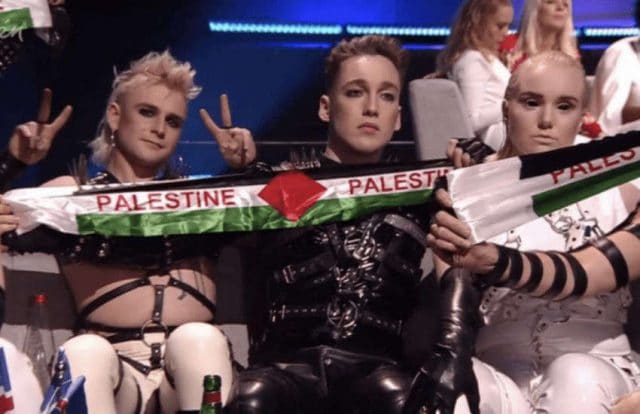 Punk band Hatari have filed a complaint with an Israeli airline after they were assigned ‘bad’ seats on an aircraft.

The band left Tel Aviv for London on El Al Israel Airlines on Monday (20 May).

The group caused controversy after they held Palestine flags when the camera cut to them in the green room.

The seats assigned were center seats in the three rows in the back of the aircraft.

‘This is what they get,’ the staff allegedly said.

He said: ‘Thank you EL AL for the “special treatment” #coolkidssitintheback’

Hatari press representative Felix Bergsson, however, said he was ‘disturbed’.

A photo of the band’s seat assignments, taken from the airline booking system, was also allegedly published online.

Some have considered this to be a violation of privacy or air transport rules.

The EBU, which runs Eurovision, commented on the protest.

A spokesperson said: ‘In the live broadcast of the Eurovision Song Contest Grand Final, Hatari, the Icelandic act, briefly displayed small Palestinian banners whilst sat in the Green Room.

‘The Eurovision Song Contest is a non-political event and this directly contradicts the contest’s rules.

‘The banners were quickly removed and the consequences of this action will be discussed by the Reference Group (the contest’s executive board) after the contest.’

Iceland may also be disqualified from future contests, according to the rulebook.

The band previously criticized Israel for the government’s treatment of Palestinians.

‘[It’s a] case of the strong preying upon the weak,’ they said. ‘[It’s using] force against people who, lacking equivalent military backing, are unable to stand up for themselves.’