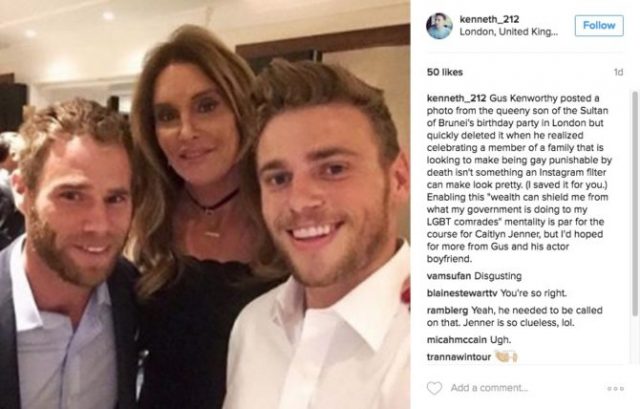 According to an Instagram photo floating around this weekend, Gus Kenworthy (a professional skier), Matt Wilkas (an actor), and Caitlyn Jenner (an embarrassment) all went to a party for the son of the Sultan of Brunei. And they didn’t get stoned to death, not even once!

The photo comes via Kenneth Walsh of Kenneth in the 212. He claims that Gus posted a photo of the trio at a party before deleting it a few minutes later. According to Kenneth, the party was a celebration for the Sultan’s son. As you’ve surely heard, Brunei imposes harsh penalties on LGBTs, up to and including death for consensual gay sex. Unsurprisingly, the laws there are even worse for women.

So is it true? Well, Caitlyn was photographed entering a birthday party this weekend by the Daily Mail, though they didn’t say whose. And Prince Azim’s birthday is indeed July 29.

But is the photo of the trio actually from the Prince’s birthday? That’s harder to verify. There don’t seem to be any reports of Azim throwing a party this weekend (which doesn’t mean he didn’t) so it’s possible it’s a misunderstanding, a hoax, a joke, or simply a malicious lie someone cooked up to make everyone look bad. Or it could be true.

But hey, who cares about accuracy! Accuse first, ask questions later, that’s how we like to do things.

What’s not in dispute, though, is the harsh and horrible regime ruling the country. It’s not just queer people who suffer under the absolute monarchy; with religious law strictly enforced, everyone is forced to endure terrible treatment with the worst directed at marginalized groups.

If the rumors are indeed true, and these celebs did attend a bash for a despotic family, now would be a great opportunity to restore their standing the community by speaking out against the regime. Actually, it would be nice if they did so regardless of whether they were actually there.