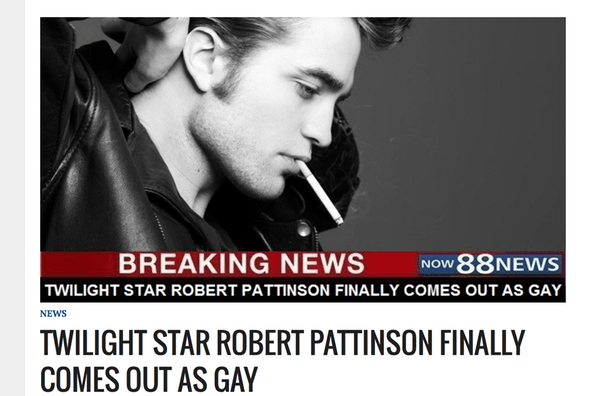 The internet temporarily had a freak out over a rumor that Robert Pattinson had come out as gay.

Speculation regarding Pattinson, who has not come out as gay, began when hoax news site Now88News published a supposed “exclusive” interview with the Twilight star to talk about his sexuality:

“I completely fell for this guy and at first I thought I was confused with my emotions and I did not want to let my female fans down … But after careful consideration I felt it was best to come out to the public and confirm that I am gay” Says Robert.

And while the fake article definitely caused some consternation on Twitter, it didn’t seem to reach Twihard Defcon 1.

First, the Brangelina break up. Second, did Robert Pattinson just come out as gay? What's next? Dwayne Johnson is a REAL tooth fairy? Lol

Wait wait is it true that Robert Pattinson is gay? ?

As International Business Times notes, Pattinson coming out as gay would have made for an interesting plot twist in the public life of the movie star given that his famous ex-girlfriend Kristen Stewart is now in a relationship with a woman, Alicia Cargile:

They have been dating on and off for the past three years. In an August 2016 interview with the New York Times, Stewart opened up about her romance with Cargile, who is also her assistant, saying: “I love her so much.

“I would never talk about any of my relationships before, but once I started dating girls it seemed like there was an opportunity to represent something really positive. I still want to protect my personal life, but I don’t want to seem like I’m protecting the idea, so that does sort of feel like I owe something to people.”