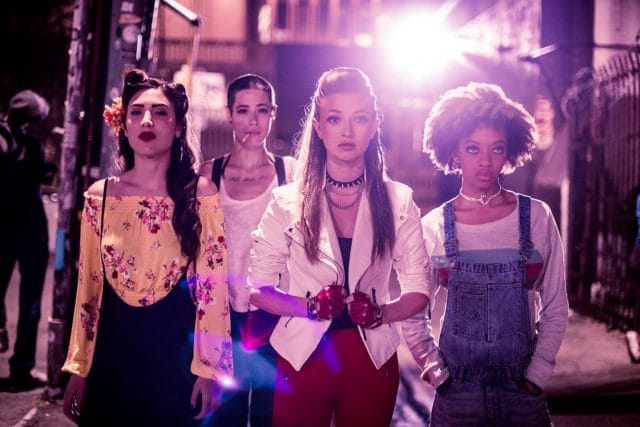 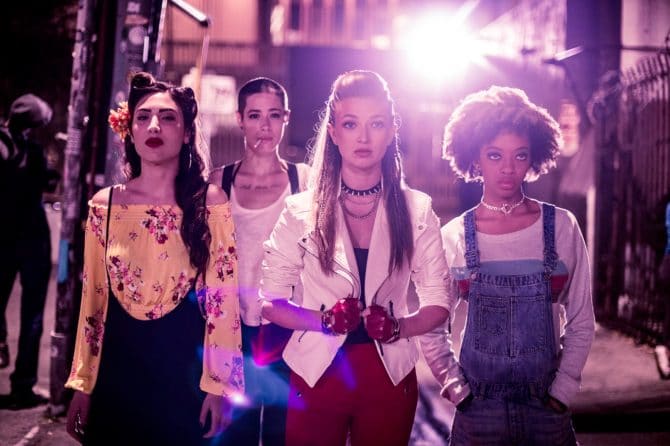 Brad Michael Elmore sounds a bit winded as he joins us on the phone. “I’m here!” he chirps.

We know why: His third feature film, the dark comedy Bit, opens at Outfest in Los Angeles July 26 & 27.

Bit stars transgender actress Nicole Maines (of Supergirl) as Laurel, a recent high school graduate who jets off to Los Angeles to spend the summer with her brother. Her first night in town, Laurel finds herself titillated and drawn in by a group of beautiful queer women led by the menacing Duke (Diana Hopper, of Goliath). The twist: Duke and her friends are actually a cabal of vampires determined to rid the world of toxic masculinity…one meal at a time. When Laurel becomes one of the vampire coven, she must face off against a troupe of moronic vampire hunters, a crazed vampire worshiper, and Duke, whose lust for power threatens what Laurel holds most dear. Much like The Lost Boys and Once Bitten, Bit tells a horror-action story with the occasional smile and wink.

Elmore allotted us a few minutes just days before the Outfest showing of Bit to discuss the film, its queer content, and the power dynamics it satirizes.

I don’t know if my desire was to write a vampire lesbian horror film. There are a few things going on here. First and foremost, a long time ago, I lived in Huntington Beach. I was on the pier, and I’m a big fan of the movie The Lost Boys.

There were legit skinheads that occupied that space, stomping around in their group. I saw them walking through the crowd—they make their presence known. As the group was walking, there was this maybe 14-year-old girl with curly black hair, big sunglasses and a joint. She was dressed exactly like Slash. 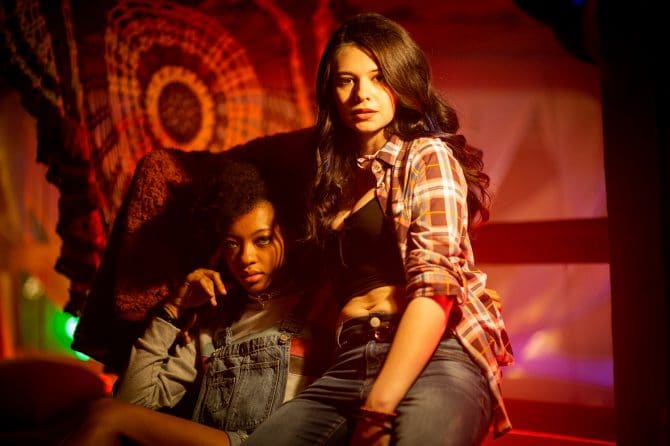 Yeah. Black skinny jeans, a big white shirt all ripped up. And she came rolling by on a skateboard and double middle fingered these skinheads. My first thought was I’ll never be that cool.

And I thought that…those are my Lost Boys. Something just clicked in my head. I knew it was a way in [to a story].

The other thing was that I’d just made two movies that were somber, moody pieces. I wanted to something fun. There’s an absence of—I think people know what I mean when I say a lot of horror movies are just coded for 13-year-old boys. 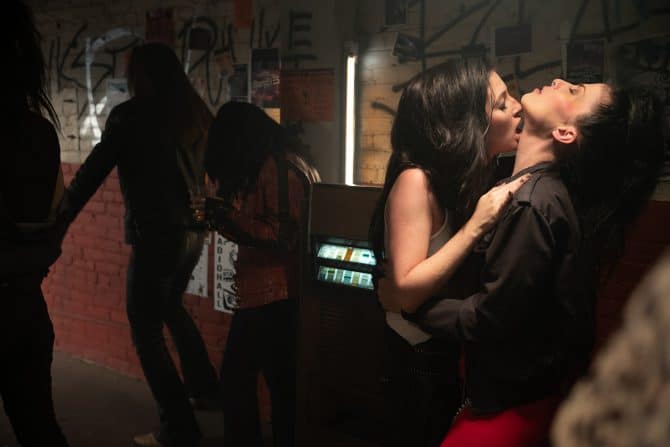 Not that girls can’t enjoy them too, but my big goal was to do horror for a younger, female audience. What does that look like? A fun, sexy genre movie. So that was a challenge for myself. It was a fun space to inhabit as a writer.  With the movie, I’m occupying a space that wasn’t mine to occupy, necessarily. It was so important to me to have a lead who was trans. I was so tired of studios wanting a pat on the back for having secondary or tertiary characters to represent something. You know, make Spider-Man trans!

It’s such a no-brainer to me.

As a writer living in this world, your job is to be perceptive. Empathy is your biggest tool, and it’s your biggest draw. Now obviously, a lot of movies are made about subculture. Part of the reason someone wants to make a movie about disco dancing, for example, is that it draws people in to want to learn.

The learning is part of the draw of creating. However, I also know that at this point in hiring [in entertainment] there needs to be more inclusiveness. My interest was my frustration at that climate not getting with the program. I did the research. Writing didn’t take me very long. The research took a long time. I’ve lived in LA a long time, so I knew I could rely on people I knew in the community once the script was finished. I was like listen, if there’s anything here that pisses you off or feels dishonest or codes something I don’t understand [let me know]. So before I sent the script out to anyone, I vetted it. Laurel’s easy to identify with because everyone has been horny and 18. I also didn’t want to take the cowardly route and make the character neutral where she’s trans, and it has nothing to do with anything. As a writer, that’s not how I feel the world works.

Wherever you go in life, the world is going to ripple and react to you based on religion, your height, your weight, how the world reacts to you and you react to it. So [making her transgender] had to be in there somewhere just as a texture for the character. I didn’t want to tell a story about the trans experience. I just wanted to make Jem & the Holograms.

I loved that as a kid, and I wanted to have something glossy and fun.

It’s in the script. I wanted a trans character played by a trans actress. 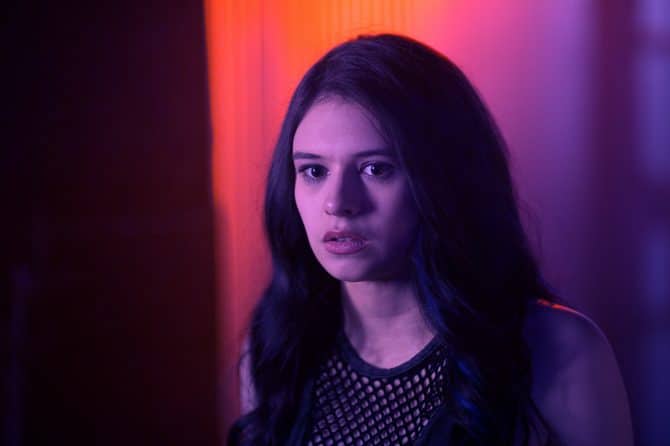 Well on my last two movies I worked with local actors and unknown talent. That’s sort of my milieu. If I see something in someone, I can bring it out of them. Going through casting, there are quite a few trans actors out there. The main thing I was looking for was someone who could convincingly have just graduated high school. I saw Nicole on a breakdown. I’d read her book, Becoming Nicole, in my research. I saw her role on Royal Pains, Skyped with her, and immediately we hit it off. I knew she was perfect for it. She read for the producers and was great. It’s a lot of pressure, but pressure is Nicole’s middle name. She’s a resilient, intelligent person. I could work with her forever.

Anybody can relate to having a family, and having something in the past that drew on a lot of the family’s resources and emotions. If you pick up on it, it’s there. If not, it’s a story about trying to find a way to be the person you want to be. The ultimate theme of the movie doesn’t have so much to with being transgender as it does power structures, and how minority voices get access to power.

No. And that’s totally fair to ask. Like I said, I have inherited a debt that I cannot pay back. I can’t keep that hidden, and I have to be clear and honest and true.

Not what I thought I would get. It’s been a really positive response. I’m not going to guess as to why, but I really tried my best to do it fun and right. This whole thing was like a big Trojan Horse for me. I wanted to do something that was genre, and something that was wagging at the culture. My biggest influences come from rock & roll. Rock & roll stars have always been crazy, in your face, knocking down doors and smashing the culture. We have a scene of a queer couple in bed but don’t comment on it. That was the goal, to say “All this will be normalized.”

What the movie is ultimately about is power.

It’s just a scene. I don’t think the movie…I don’t think it walks in a strict philosophy. What I was driving at, and what I hope comes across is more that there are accepted power structures you can’t even see. You can’t say “I’m a dude. I didn’t know better.” No, f*ck that. You are responsible for your own actions. That’s one element.

The other is that you can’t blame your vampirism for your behavior.

And that’s something Laurel makes explicit. Actually, if I have to side with anybody in the movie, Duke is my mouthpiece. 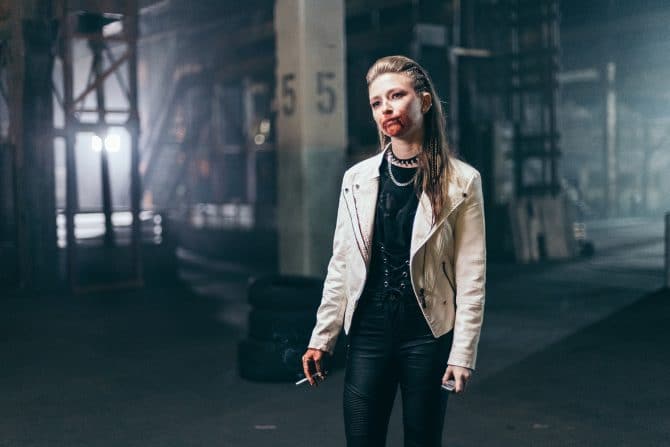 I don’t think she ever says one wrong thing.

In a way, talking about philosophy, Duke is the necessary brick through a window that allows others to enter. While a lot of things are imperfect in retrospect, it was her fight that did it. I really love that character. She’s more saying “This is the way the world is.” And Laurel says “You’re right, but…”

If there’s a demand, I’ll revisit. Duke, for me, is like Alex De Large from Clockwork Orange, or The Joker. When you’re a teenager, you’re so angry. You need nihilism to feel more adult, even if it makes you more childish. It’s a way to separate yourself from childhood. Now unfortunately, a lot of teenagers don’t grow out of that. And I’ve watched these kinds of characters hijacked over the years by Reddit trolls. So I just wanted to make a cool, nihilistic character that can’t be hijacked by a Pepe the Frog meme. This will always stand for the young girls who might like [Duke] and it can’t be hijacked by a destructive force. Reddit trolls are such a destructive force, so I thought what better way than to make them dorky and impotent?

I’d like to add that the movie isn’t what people might suspect. It’s not guns just aimed at heads movie. It’s a lot more goofy.

First and foremost, it’s a fun genre film of the type that you liked to watch when you were 14, 15. That’s what I was aiming for.