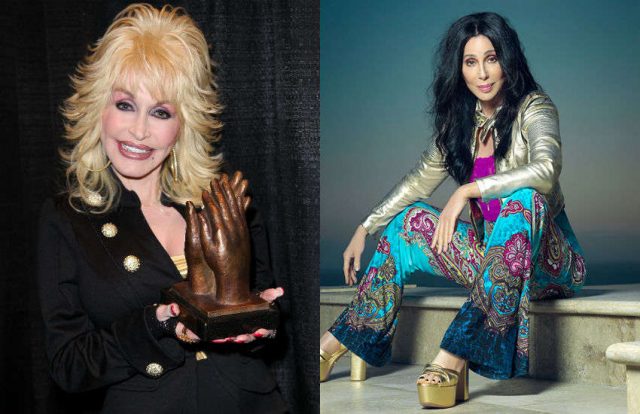 Singer and actress Cher turned 73 yesterday and among those to post a happy birthday message was fellow performer Dolly Parton.

In a sweet video message posted to Twitter, Parton said ‘Hi Cher, it’s Dolly. Happy birthday to you. We’re the same age now. Well, I might be a minute or two older than you but what’s a minute or two among friends and old bags like us!

‘Anyway, I just want you to know I’m proud of you, I think you’re great. I hope you’ll be around for 100 more years, to hang around with me if nothing else. Just know that [breaking into song] I will always love you, along with everybody else in the world. Happy birthday to you.’

Country legend Parton, who turned 73 in January, wrote and recorded the song I Will Always Love You in 1973. The late Whitney Houston covered the song in 1992 and turned it into an even bigger smash.

Parton was just one of many celebs to wish Cher a happy birthday.

Ellen DeGeneres tweeted, ‘Happy birthday, @cher! I got you, “Babe.”’

George Takei posted a video of some of Cher’s career highlights and iconic moments, with the message, ‘Help me wish the one and only @Cher a very happy birthday.’

Meanwhile, RuPaul took the occasion of her birthday to post a Spotify link to his favorite Cher album.

Cher herself responded to the thousands of birthday messages she received with gratitude, thanking everyone for their support. Using a mixture of text and emojis, she thanked her fans for their love and supportm, saying ‘U have been there in my dark hours 2 give me pep talks, been there 2 share exciting and fun times.’

In another tweet, she also teased the release of her own brand perfume.