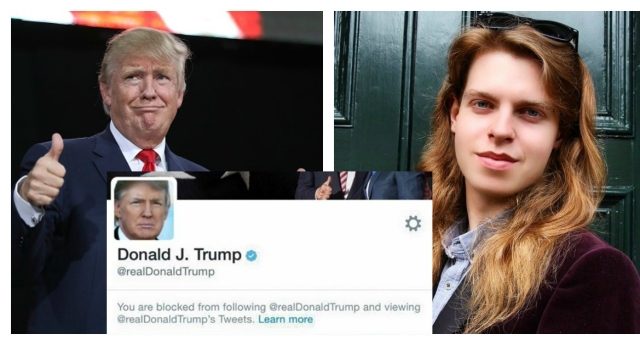 President-elect Donald Trump appears to have blocked an LGBT campaigner and activist on Twitter – and there could be many more.

Robbie Travers, from Edinburgh, Scotland, was shocked to discover he could no longer see Tweets by the 45th president when a notice saying Trump had blocked him appeared. The bisexual activist did not have a vote in the US election, but has Tweeted and written about disagreeing with president elect Trump.

He now believes it could be part of a systematic blocking of people who disagree with the next leader of the free world – which could include many more LGBT activists.

Mr Travers told PinkNews: “To be blocked by the President Elect is a little surreal.

“Whether he personally did so, suggesting he really has spent a little too much time on Twitter, or whether he is importing whole lists of people to block, it suggests someone who doesn’t want to listen to his critics.

“I don’t know about you, but I’d rather the President Elect of the United States of America partook in less ‘trolling’ and more preparation to govern.

“The US gains nothing from the President Elect attacking the cast of a musical, an entertainment show and telling another nation who to choose as Ambassador.

“It gains something from a political maverick, with no experience, devoting his attention to prepare for being a dignified governing figure.”

The activist has just over 5,000 followers on the site, while the next president has almost 17 million.

Every member of Trump’s cabinet so far opposes LGBT rights, while his VP pick Mike Pence has been heavily criticised for supporting so-called ‘gay cure’ conversion therapy in the past.