Home Gay Life Donald Trump: “We will be ending the AIDS epidemic shortly in America” 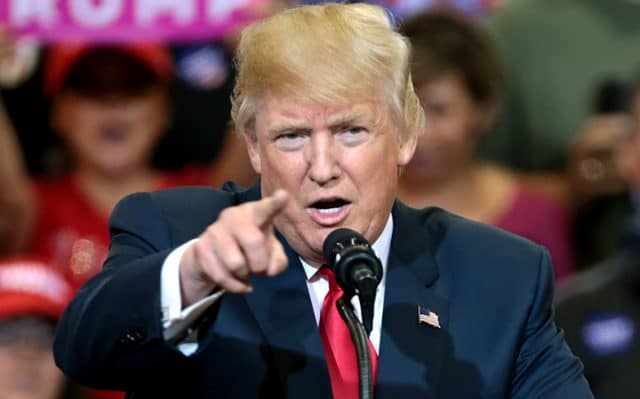 Television personality Donald Tr*mp has vowed to bring an end to the HIV/AIDS epidemic.

During his campaign speech Thursday night in Cincinnati, the President of the United States said at the Bank Arena: “We will achieve new breakthroughs in science and medicine. I see what they are doing. I see it. They show me.”

He added: “The things we’re doing in our country today, there’s never been anything like it. We will be ending the AIDS epidemic shortly in America, and curing childhood cancer very shortly.”

Tr*mp also hit out at the “far-left’s destructive agenda” for poverty and crime in American inner cities.

When Tr*mp kicked off his re-election campaign back in June, he promised to “come up with the cures to many, many problems, to many, many diseases including cancer and others. And we’re getting closer all the time.”

Back in June, a new poll performed by YouGov and The Hill found that less than a quarter of Americans (24%) approved of the way Tr*mp’s administration has handled LGBTQ issues.

The poll asked 1,225 Americans for their thoughts on the way that the Tr*mp administration has handled LGBTQ rights.

However, despite only 24% approving of the way he handled LGBTQ rights, only 38% disapproved of the way they had been handled. Unsurprisingly, Democrats were more likely to be opposed to Tr*mp’s handling, with only 8% strongly in favour, whereas 47% of Republicans strongly approved.

When it came to strong disapproval, 67% of Democrats were opposed, compared to just 12% of Republicans.

There are far too many attacks on the LGBTQ community to list here, but recent attacks have included banning embassies from flying rainbow flags, banning on transgender people from serving in the military, and education secretary, Betsy DeVos, admitting that she knew her anti-trans policies would “harm” children.