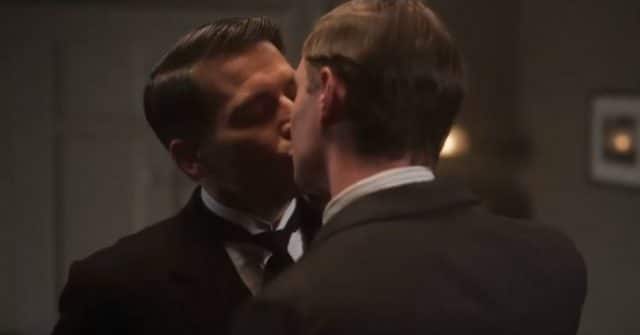 LGBT+ cinema-goers will be delighted by the trailer for the upcoming Downton Abbey film, which reveals that gay valet Thomas Barrow will finally find romance.

In one brief moment in the trailer, an unidentified man can be seen leaning in and sharing a passionate kisswith Thomas, indicating that the character who stole gay hearts during the series’ original run may get some kind of a happy ending.

The trailer also reveals that the Downton Abbey film—which will hit cinemas in September—will be set in 1927. At the beginning of the trailer, Lady Edith gets out of a car after arriving back to Downton Abbey with her husband. When her father Robert Crawley notes they have “no maid, no valet, no nanny even,” her husband states: “It’s 1927, we’re modern folk.”

Meanwhile, the Downton Abbey trailer indicates that the film’s central storyline will follow the family and staff preparing for a historic visit from the King and Queen.

Gay valet Thomas captured the hearts of Downton Abbey fans across the world when the ITV series had its original run.

In the first series of the hit show, Thomas—who started off as a footman in the famous home—was revealed to be having an affair with the Duke of Crowborough. Sadly for Thomas, and for his LGBT+ fans, the romance didn’t end well.

In 2014, the character—who is played by Rob James-Collier—tried to cure himself of homosexuality. Thomas started taking injections that caused him pain and discomfort in an attempt to make himself straight.

Speaking at the time, Downton Abbey writer Julian Fellowes said that Thomas had fallen for “the quackery that this can be cured, that he can get rid of this dumbbell he is dragging around with him.”

Speaking in 2015, James-Collier revealed that he he had teenagers who hadn’t come out to their families yet contacting him during the show’s run to say that Thomas’ storyhad resonated with them.

“To see something on the TV in a main show that they can identify with is quite rare so I really tapped into that.

“It’s really humbling when you see letters like that because Thomas is moving people and that’s what drama’s supposed to do. It’s supposed to evoke emotion.

“It’s lovely when you get that, it’s the greatest compliment of all. Very humbling, poignant and heartfelt.”

Despite this, James-Collier said in 2017 that playing a gay character has had a negative impact on his career.

“I think audiences in the US can identify quite easily with the quintessential English gent and English lady, whereas a neurotic, dark, gay character like Thomas is a hard thing to put into the American market.

“It can lead to typecasting,” he added.

The Downton Abbey film will be released in cinemas in the UK on September 13 2019.