Home Gay Life Dozens of Methodist clergy come out as gay and lesbian despite church’s... 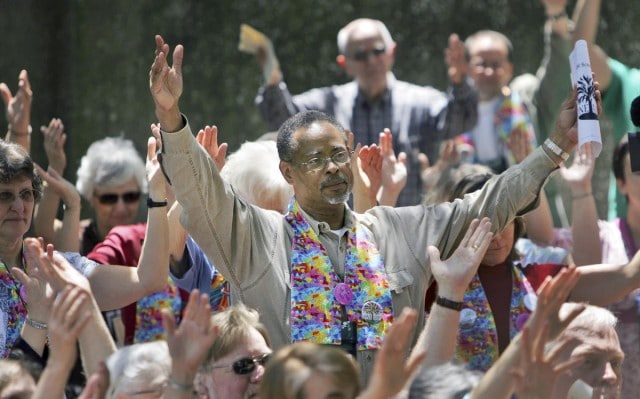 While other denominations in the U.S. have lift the ban on same-sex marriages and LGBT clergy, the Methodist church is still prohibiting “self-avowed practicing homosexuals.”

Despite church’s ban, on Monday dozens of clergy came out as gay and lesbian. 111 pastors, deacons, elders and candidates for ministry have signed a public letter regarding their wish to be free of the ban.

Church asks “that we not bring our full selves to ministry, that we hide from view our sexual orientations and gender identities,” they revealed in the public letter.

“While some of us have been lucky to serve in places where we could serve honestly and openly, there are others in places far more hostile, who continue to serve faithfully even at tremendous cost to themselves, their families, and yes, even the communities they serve, who do not receive the fullness of their pastor’s gifts because a core part must remain hidden,” the letter continues.

The action came during the General Conference in Portland, Oregon. Between 10-20 May, 800 delegations will debate the bans that the Methodist Church has put on same-sex marriages and LGBT clergy.

48-year-old pastor Laura Young felt lighter after signing the letter. “I feel lighter already,” Laura said. “I can be a better pastor and a better person when I can be my full self, living in the light and with integrity.”

Laura has been out, but not to the Methodist Church, comparing the situation with military’s erstwhile “don’t ask/don’t tell” policy.

Liberal Methodists have been continuously trying to change church’s policy on homosexuals, yet they haven’t manage to succed.