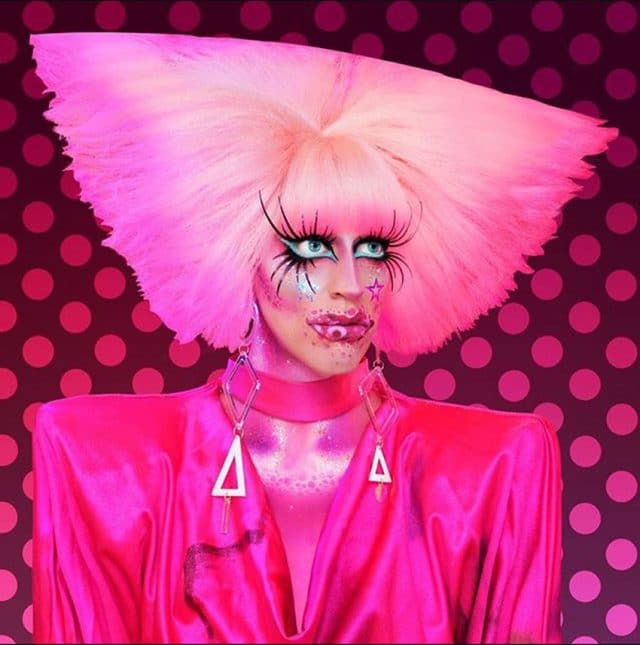 With All Stars 4 wrapped up, it’s time to look at the remaining Queens to see who would be great on the next All Stars season. We’ve picked who we think has more than earned their space and would make a great season.

Who do you want to see?

These two Queens stole our hearts back on Christmas during RuPaul’s Holi-slay Spectacular, and we see that as the perfect opportunity to catapult them into a second shot at Drag Race. They’re both LA locals and we’ll remind any WOW+ producers that means you won’t have to pay for plane tickets.

Mayhem Miller, the Party Queen, we’ve all seen the memes of Mayhem’s piercing gaze into the hearts of mankind, but Mayhem (or Maymay, as her friends sometimes call her) is far more than that. She won episode 1 of her season with a gorgeous and inspired latex glove outfit, and everybody who’s seen her live knows that nobody owns a room quite like Miss Mayhem.

Sonique, the Somersault Queen, is one that we weren’t expecting to make a comeback after her rather non-notable finish at ninth place on season 2. However, there’s two things we remember – her amazing gymnastics against Morgan McMichaels, and her heartfelt declaration that she is a transgender woman at the reunion. In fact, the first transgender woman of the series. Sonique’s resurgence reminded us just what a beautiful person she is inside and out, and we’re excited to see what else she’s got.

Mariah, the Ball Queen, also known as the President of Drag is our only real Ball Queen through-and-through so far, surprising for a show packed with references to ‘Paris is Building’. Mariah is now a staple of WowPresents and its various spin-off shows like “Wait, What?” and “Fashion Photo Ruview”. Mariah’s beautiful mug and hilarious antics on Drag U have stuck with us all these years later. She was also most recently awarded the status of Icon, one of the highest in the ballroom scene. Mariah would really introduce the kids properly to a world of Drag that Drag Race tends to skimp out on.

Miz Cracker, the Salty Queen, is a breakout star from her season. Her openness with her struggles with anxiety and youthful aesthetics have made her relatable to a generation of youngsters. Miz Cracker’s run on her season was a bit odd, always safe, finally scoring a win in the make-up challenge, before going home the very next week. The story felt unfinished and it makes sense for Miz Cracker to come back and complete it. With newfound confidence, and no Aquaria in sight, Cracker may be able to concentrate and hone in her comedy skills for the television audience.

Yuhua Hamasaki, the Bootleg Queen, another Queen from season 10. The Chinese Princess of Manhattan was a shock early elimination for such an established NYC performer who actually helped built many of her season sister’s careers like Aquaria and Miz Cracker. Yuhua is a performer who already clearly had more to give on her season, but since the season has ended she’s shown her hustle and managed to keep her relevance right through All Stars 4 with gorgeous photoshoots, and her hilarious Bootleg Fashion Photo RuView series (which more often than not has actually been better than the official version). This stunning Queen has been everywhere, with a hilarious acting cameo in All Stars 4 winner Trinity the Tuck’s “I Call Shade” music video, and even scoring front-and-center position in promotion for the Life Ball, one of the most important and famous international LGBTQI+ fundraising events along side Alaska, Raja and Peppermint. Pretty damn impressive. Yuhua’s got the comedy, sewing, charisma, nerve and uniqueness to go far if the producers are willing to give her the chance, she could truly give us the ultimate underdog storyline of Drag Race we deserve.

Peppermint, the Legendary Queen, is always looking right. Peppermint manages to turn everything she’s in to solid gold with her warm personality and stunning vocals. She was a featured performer in Broadway musical “Head Over Heels” as, one of the biggest mainstream roles from a RuPaul’s Drag Race contestant and even before that had long since been a legendary figure of the New York nightlife. Peppermint may have not had the best run on Drag Race itself, but now that she’s familiar with being followed by cameras, we reckon she’d be a powerhouse with her endless charisma and dazzling smile. We’d also expect her to cleansweep if “Lip Sync for your Legacy” is still in action.

Asia O’Hara, the Legacy Queen, ended on a rough note on season 10. There’s several ways to go out – vomiting and being disqualified like Willam, not knowing your lyrics like Valentina, or like not being fair like Manila Luzon – but the butterfly massacre still took us by surprise. The truth is Asia was probably carried to the season 10 finale. Her Madame Buttrface and Breastworld wins are among the most pointless challenges in the show’s herstory, but we’ve seen Miss O’Hara live and know this does not represent who she is. A stellar, imaginative, warm and charismatic performer who simply didn’t get to showcase this on a season so focused on storylines. Miss O’Hara has a lot to prove, but we know she would meet the challenge.

Acid Betty, the Alien Queen, was once described to me as “the most creative person in the world’s most creative industry” which really is correct, yet Acid Betty probably gets zero of the credit for it thanks to a weird villain edit and an early exit on season 8. If you look back on the season, you’ll see Acid’s “bitchy” moments are not really that bitchy, it’s just every time she says something there’s a boatload of shady sound effects to make it seem so. Kim Chi, another artistic look Queen on the same season promised relatable teen storylines which meant Acid couldn’t be allowed near the end. Thanks to Kim’s limitation in performance aspects of Drag, this basically leading to Bob the Drag Queen having to do extra victory laps during the season around the other contestants. Acid proved she could do (almost) it all, Snatch Game aside. But we need this Queen on an All Stars season stat.

Shea Coulee, the Slay Queen, still has one of the most impressive on-season records of Drag Race, with four wins on a regular season (only met by Sharon Needles of season 4), thanks to a twist on the finale, Shea Coulee lost the crown to her friend Sasha Velour, but her time may be coming soon. Shea skipped out on both All Stars 3 and 4 while her fellow season 9 Queens took the stage, perhaps to minimize distracting storylines. Shea showed us on her season she can rise to nearly any type of challenge successfully. Comedy, check. Acting, check. Singing, check. Sewing, check. Truly a Jill-of-all-Trades. With more time to develop, and prepare for runways, Shea has only gotten better and better, and she would be a massive threat to her competition.

Darienne Lake, the Classic Queen, is one of the most stunning, hilarious, best lip-synchers of the entire franchise and her recognition for that is minimal thanks to being the rival of the popular BenDeLaCreme. Miss Darienne tended to suffer on the runways and sometimes didn’t tackle challenges successfully on season 6, but when she did hit it, she HIT it out of the park. In the finale she managed to act so superbly, she broke the script and force RuPaul to adlib and return to finish the scene with her, not to mention winning an acting challenge serving nothing but face. Her mug was always stunning, and her looks according to her Instagram have greatly improved. We’d love to step into the cool refreshing waters of Miss Darienne Lake a second time.

Ongina, the Headpiece Queen, is part of the OG, sis. Ten years ago when we first saw Drag Race, it was Ongina that made us gobsmacked with her unique and modern aesthetics. It was Ongina that made us cry for the first time on Drag Race as she opened up about her HIV status, and it was Ongina who gave us the first shock elimination. Ongina stole our hearts, and clearly was a special favorite of RuPaul’s who even made the song “Ladyboy” inspired by Ongina. Ongina has the smarts, the wits, the personality to be a modern day fan favorite, and we’re here for it.  Every All Stars season she’s highly speculated for a reason, because she is an absolute legend, and inspired a new generation of Drag Queens with her humor and strength.

Returning All Stars are now on the table, so failing this cast of ten, we would want to see Yarlexis, who were #ROBBEDT even worse than Latrila on All Stars 1. Why on earth was Yarlexis in the bottom on the Girl Group makeover challenge, nobody knows.

Yara Sofia, the Avant-Garde Queen, is so unbelievably gorgeous and was underrated severely by the Judges back on season 3. On All Stars 1, she was Chad’s only real competition as the only queen besides Chad who was able to turn treasure from the trash team twist. Yara was ahead of her time, and her time is coming soon.
https://www.youtube.com/watch?v=XDdrNcxJELk

Alexis Mateo, the Pageant Queen, is always pushed aside in the Raja vs Manila Luzon discussions, but she was the ORIGINAL Pageant-girl-Who-Can-Do-Comedy. Alexis Mateo had a massive range of skills, and her bottoms were really only due to being the “least good” of the day, never bad. That’s just how harsh the competition of season 3 was. The mother of Miss Vanjie must return soon.

The finalists that should’ve been on All Stars 1, but with Chad Michaels already locked into the Hall of Fame, and Raven out of the running due to conflict of interest reasons as Ru’s make up artist. We’d like to see their team mates take up the mantle. She’s also perhaps the most underrated lip-syncher in the show, just take a look at this gorgeous one:

Jujubee, the Reading Queen, is one of the few Queens who can be utterly savage in her reads but still be beloved by all. She just has that knack of making it never come from a bad place, season 2 is an ongoing drama and fellow Queens have nothing but good words for Juju. Miss Thing suffered from confidence and alcohol issues in the past, but she’s a new lady and it’s time for her sharp wit and humor to take center stage.

Shannel, the Showgirl Queen, wears costumes and is classy. Shannel’s diva attitude and self-confidence is legendary, but she did have all the talent and experience to back it up. Shannel is a clever Queen who always has her eye on the bigger picture, and can be wickedly funny when she needs to be. She’s not a staple of Las Vegas for nothing.