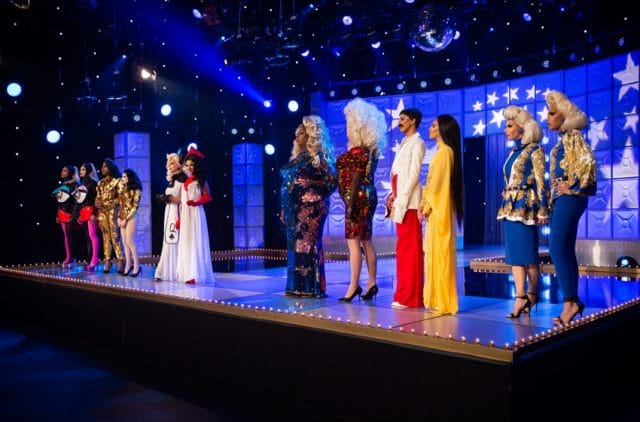 Tonight’s the makeover episode. These are usually a bit of a snooze as we’re forced to give screen-time to random guests that we will never think about again. Luckily, this time it’s a Good Judys theme and we’re a lot more invested this time.

The episode was full of greater interactions, a shocking twist and some high quality drag. Let’s get to it, Judys.

Valentina has now departed and leaves a bit of a void in the cast. Trinity reveals she would have also sent home Valentina despite earlier in the season suggesting otherwise. That said, Valentina probably was the right answer.

The Queens return to the Work room and the Ru photos are gone and replaced with Judy Garland. Legendary icon to gays across the world that you will remember from The Wizard of Oz, A Star is Born, and my personal favorite, Meet Me in St Louis.

Ru enters and delivers a bit of history about the phrases ‘Friend of Dorothy’s’ and ‘Good Judy’ for the kids, along with Judy Garland’s relationship to the Stonewall Inn Riots. This is all build up to introduce the challenge – making over the Queens’s best Judys. It’s a bit of a stretch, but we’ll allow it. The Queens must also do a brief Judy Garland inspired dance routine.

Naomi, Manila and Trinity all won their respective makeovers on their original seasons (Avals Mateo was robbed though). Latrice was in the bottom two on hers, Monet went home on hers, and Monique never made it that far.

There’s an interesting connection that both of Naomi Smalls’s makeovers have links to the Wizard of Oz, but luckily Naomi is smart enough to not repeat.

Yes, it’s another one of those episodes where RuPaul feels her guru jush (gush) and explains to everyone how their life problems can be resolved with a few vague slogans and some positive thinking. Oh dear. When we asked for a walkthrough, this is not what we meant.

Latrice gets a touching scene where she talks about her incarceration due to drug charges and how Tim helped her get her back on her feet, by getting Latrice’s friends together to make garments so she could start work as soon as she left the big house. It’s a sweet, touching moment that’s immediately spoiled by RuPaul fake crying. Apparently after another Emmy.

Manila’s walkthrough consists of her apparently explaining why she is in fact a terrible person to live with as a result of Drag. It seems tongue-in-cheek and a result of Manila being overexcited but the scene drags on for really long without going anywhere.

I don’t know, it was a weird mix of emotions. Skip through this bit on rewatches.

It’s time for a Summer Stock inspired dance number, the editing is all over the place with weird cuts where we genuinely can’t really tell how well anyone did. These routines usually aren’t given much weight for the makeovers anyway.

Monique’s paint on Shanida is good, giving us a little Courtney Act. From the little we saw of her performance, it was a bit messy. Monique serves us a conceptual look with her partner which is a bit of a risk. The look features giant graphic eyes which Latrice perfected last episode, and concept might get away of the challenge ideal of making your partner part of your Drag Family. Overall, pretty decent.

Monet does pretty well on Patty Cash despite obvious difference in skin tones, the texturing and similarities show through even though Patty Cash looks a little ghost-white in some of the lighting. Monet probably had among the biggest challenges of the episode.

Manila’s chosen a rather basic Queen of Clubs / Queen of Diamonds look for the episode (maybe some shade after not winning last episode?). Iyowife’s dress doesn’t hit the ground and overall looks a bit shoddy on the costumes and nowhere near what we expect from Manila. Manila’s make up is reminiscent of the beautiful paint she had back on season 3’s MacArthur Park lip sync, but for some reason the paint on Iyowfe is more her usual paint. The problem with that is that they simply don’t match.

Trinity does splendidly this episode with a well transposed look, but it’s nothing special. She’s done the assignment and done it well, but there’s nothing much more to say here.

Latrice’s performance with Alexis Knight is great, the make-up is all right too. There is however a pretty big disconnect in the outfits. Latrice explains to Michelle that it’s a fire-and-ice theme, which fits things into place, but Latrice is behind the others with the possible exception of Manila.

Naomi is the stand out this time, she emerges with Extra Smalls in two classic Cher looks, but in a twist Naomi turns herself from Cher into Sonny. It’s brilliant, clever, on brand and unexpected. The make-up is flawless too and Naomi deserves full marks.

The Judges rightfully declare Naomi as one of the winners, Monet gets the win too for some reason. We probably would have given it to Trinity or even Monique, but I suppose Monet had the uphill battle with hers. Naomi and Monet win a trip to Iceland, a surprisingly solid prize that leaves the Queens in surprise thinking it’s a joke. Latrila find themselves in the bottom. Shock! Scandal! It has to be one or the other. Naomi is living hard for the irony.

It’s back to the same old deliberation scene, luckily it’s shorter today. Manila and Latrice have now reached the point where it can only be one, and neither is begging to save the other. They give their reasons to Monet and Naomi and it’s back to the mainstage.

Monet is a little low energy, attempting to sell an emotional lip sync, but the emotions never reach her eyes. We wonder if she was intentionally trying to throw it. She throws in an umbrella with a clump of glitter in it. It’s not executed all that well. Umbrellas indoors are bad luck after all.

Naomi is the shock here, every move is editorial, there’s a bit of fashion, a bit of camp, fast, beautiful, elegant moves and such a sparkle in her eyes that I haven’t seen on Drag Race in the longest time. Gorgeous, one of the best of the seasons. I would have never expected the lip assassin of the season to be Naomi Smalls, and she deserves full credit for the best two lip syncs of the season.

Cue Manila’s husband screaming and falling out of his chair.

There’s a few different ways to look at this.

Manila is one of the show’s frontrunners and the only one to never be in the bottom, while Latrice was already eliminated once and is unlikely to win. Strategically kicking Manila off increases the chances of winning especially for Naomi who has less wins than the others.

Manila’s also toyed with eliminating stronger Queens herself, and put herself in a Morgan McMichaels position.

Naomi was also told earlier in the episode by RuPaul herself to essentially just fuck shit up, and Naomi’s doing what she’s been told.

So competitively, this is the smart choice.

However, that’s not the full game. Drag Race fans often find it difficult to separate television from real life and apply what they see in the show to real life. See BenDeLaCreme’s fans sending waves of hate at Morgan McMichaels last All Stars on the mere basis of a rumor that she might eliminate Ben.

Naomi potentially opens herself up to a tide of hate as a result which is never pleasant, but should she cater to fan wishes?

But what we can say is that DO take nerve from Naomi Smalls.

Please don’t send hate to Naomi or Latrice and just enjoy the goddamn show. Thanks.

Tune in next week for Sex and the Kitty Girls, an acting challenge none of us will likely enjoy.