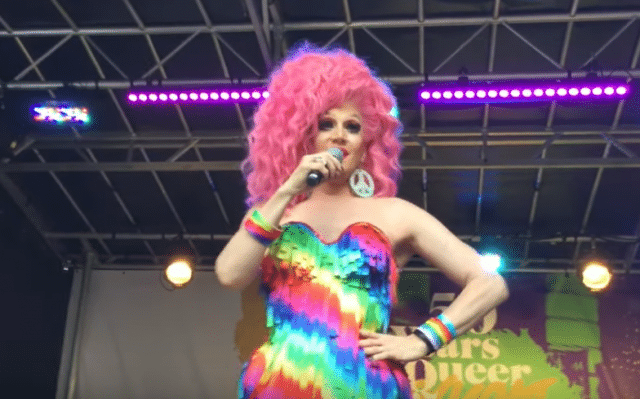 We’re sure over the past few days your social media feeds have been clogged with endless pictures of people using the new FaceApp to show off aged versions of themselves.

And while it was amusing at first, it quickly lost its charm after your saw your 50th one in about five minutes. However, former Drag Race competitor Charlie Hides had a different reason to hit out.

Obviously, the FaceApp was used by people to age their favourite celebrities, and people shared a picture of what some Drag Race stars would look like when aged.

One picture showed an aged version of RuPaul, Brooke Lynn Hytes, Yvie Oddly and Detox. The meme also used a picture of Charlie Hides, but just unedited, poking fun at her age.

The joke hit a nerve with Charlie, who wrote on Twitter: “On Friday I turned 55 years old. To someone of my generation that’s like winning the lottery.

“Most of the friends I had at 20 were lucky to make it to 30. So when people create memes trying to mock my age they just remind me how VERY lucky I am.”

She added a couple of days later: “Mocking someone for being older than you is like feeling superior because you were born on a Sunday and they were born on a Tuesday.”

As whenever someone in the current climate hits out a joke, some questioned whether Charlie was able to take one. And to them, she responded by saying: “Of course I can take a joke. It’s why I’m able to say I’m 1007 years old and that I dated Leonardo DaVinci.”

And just to prove her point, she then made her own meme with the FaceApp.

Related: Here’s how you can watch every season of Drag Race (including All Stars) in the UK for free