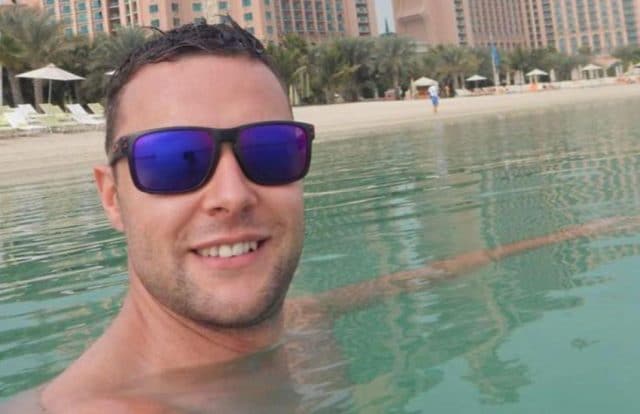 A Scottish man is freed after being jailed for accidentally touching a man’s hip in Dubai.

But then the case against him was dismissed and the charges were dropped.

Harron had been on a stopover in the Gulf city state when he brushed past a man in a bar.

Harron is said to have been holding a drink, moving through a crowded bar and held a hand in front of him to avoid spilling it on himself or others. He then ‘touched a man on his hip to avoid impact’.

He was later arrested for public indecency.

‘It has now been established that the allegations against Jamie were entirely unwarranted, defamatory, and meritless; to such an extent that the Ruler of the country found it necessary to step in and correct the wrongful action of the Public Prosecutor and to quash the judgment of the court,’ Radha Stirling, CEO of Detained in Dubai, said.

‘This was a courageous and honorable decision on the part of Sheikh Mohammed, and while it highlights the urgent need for judicial reform in the country, it is also a hopeful sign that the UAE’s leadership possesses the will and vision to pursue such reforms in the future.’

Stirling was called by police to be told his case had been dismissed, and he should collect his passport.

But then Harron arrived to the station, his passport was returned, and was told he was freed to go.

‘Of course, a fully functional legal system would not require outside intervention, and a case like Jamie’s would never proceed in the first place,’ Stirling added.

‘But we are enormously grateful to Sheikh Mohammed for stepping in and vindicating Jamie after months of hardship.’

The electrician was working in Afghanistan and was on a two-day stopover in the United Arab Emirates in July when he was arrested.

He since lost his job because of his detainment.