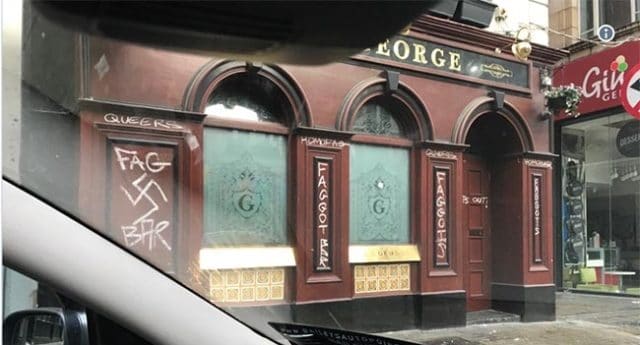 One of the oldest and most known gay bars in Dublin has been vandalised with homophobic and Nazi graffiti.

The George pub, on George Street, was left with Nazi symbols and homophobic words scrawled on the front.

The graffiti was discovered early this morning.

By 11am, a cleaning group was called to remove the vandalism and Dublin Town, a local community group, was notified.

A spokesman for the group said that they were prepared to deal with this type of vandalism.

“We have staff on seven days a week to deal with things like this,” they said. “We let the management know and have a cleaning crew down there.”

Darragh Flynn, Manager of the George said: “We are shocked and disheartened to see our building vandalised, especially with the anniversary of the equality vote this weekend. At times like these our community comes together in support like it always does, and we won’t let this ruin us celebrating this weekend’s anniversary.

“The Gardai have been notified and we are assisting with their investigations. The graffiti has been removed from the premises and The George is open for business as usual.

“We would like to now focus on the positives of today, that one homophobic act has resulted in an overwhelming amount of messages of solidarity and offers of assistance. It has truly brightened our hearts to receive such love and support.”

The police have announced that they have launched an investigation into the vandalism, which has since been covered.
The Gardaí will be relying on footage taken from the CCTV surrounding the pub to find the perpetrator.

“Gardaí are investigating an incidence of suspected criminal damage which was reported to us this morning on George’s Street.

“Inquiries are ongoing. No arrests have been made yet,” a spokesman added.

On Twitter, people have expressed outrage and disappointment over the vandalism.

“The George is like a second home to me, it’s the only bar in Dublin I feel totally comfortable in. So upset someone would do this,” wrote one person.

“Disgraceful, I hope the gowls who did this are named and shamed. We live in the 21st century,” another added.
Another person said: “I’m deeply appalled by the disgusting homophobic graffiti on the George bar here in #Dublin. I hope the vandals are brought to justice!”