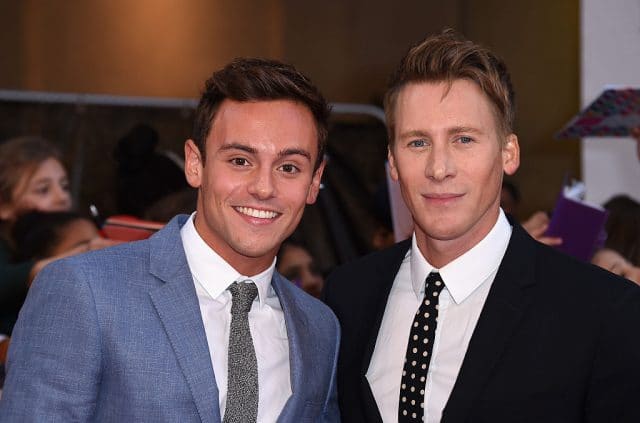 Dustin Lance Black has claimed that he and his son Robbie were denied entry to his husband Tom Daley’s dive yesterday, with organisers claiming buggies are not allowed.

Black posted a series of tweets slamming British Swimming for their alleged refusal to allow him admission with the buggy at the London Aquatic Centre.

“Sadly, organisers at @britishswimming have succeeded in creating a toxic environment for our family at their events so we can’t be there in person on this very special London morning,” Black wrote. “If you are there, please give a big cheer for our @TomDaley1994 for us.”

He then followed up with: “Dear @britishswimming, it’s time to start treating families how other nations do: as assets, not obstacles.”

Black later said that he had wanted “more than anything” to be at the event, but said he had been prevented from attending by “cruel, thoughtless British Swimming organisers.” He said the organisation had created “a situation that is neither safe nor welcoming for our family.”

Today (May 20), Black tweeted: “So we agreed over the weekend to resolve our dispute with @britishswimming in private. And within the hour the CEO of @britishswimming put out a press release that is an absolute misrepresentation of what occurred. Or as my mom would call it: a lie. This organisation is corrupt.”

In a statement issued by British Swimming to PinkNews today, the organisation said it was “extremely disappointed” that Black felt that he couldn’t be at the diving event.

“The London Aquatic Centre’s policy is not to allow buggies onto the spectator concourse for health and safety reasons and British Swimming supported this policy to ensure the safety of everyone attending this exciting event.

“British Swimming recognises the fundamental part that families play in supporting all of the athletes and offered to put measures in place to store the buggy during the event so that Tom’s family could be present.

“We were pleased to see some of Tom’s family there last night celebrating his success,” the statement concluded.

PinkNews has reached out to Black’s publicist for comment.

Last June, Tom Daley and Dustin Lance Black welcomed their son Robbie Ray to the world via a surrogate.

Posting on Instagram at the time, Black wrote: Welcome to the world little Robbie Ray. Thank you for bringing so much love and light with you. And thank you to those who helped make our dream of having a family into this wonderful reality.”