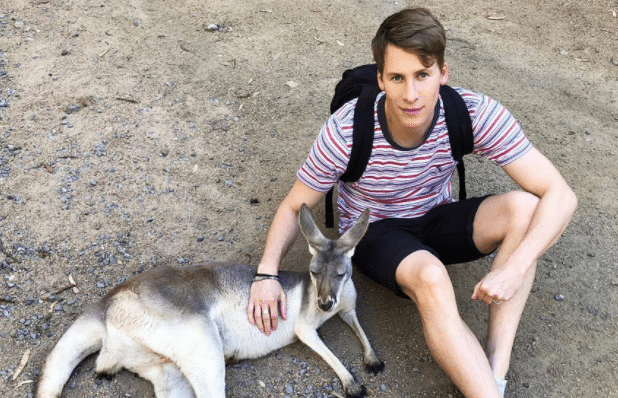 ‘No apology at all. Just an accusatory zombielike look in their eyes…’

Dustin Lance Black is currently vacationing Down Under with his diver husband Tom Daley.

But the star didn’t receive the warmest of welcomes from one store upon arrival at the Gold Coast.

Dustin has now revealed that he was ‘stopped and accused’ of shoplifting by the shop Woolworths.

‘Thanks for the warm welcome’

The writer took to Twitter to share details of the incident in Woolworths on the Gold Coast.

‘OMG! Was just stopped & accused of shoplifting @woolworths in the Gold Coast! Then out of countless folks with bags a search was demanded of mine. Thanks for the warm welcome to #AUSTRALIA @woolworths! Respect customers’ privacy much? Shame.’

A follower furthermore asked asked the Milk screenwriter is he received an apology.

Dustin replied: ‘OMG. NO. No apology at all. Just an accusatory zombielike look in their eyes.’

He furthermore added: ‘So I just got a refund for the drink I’d just PURCHASED and went elsewhere. So silly. Tourists be warned!’

Gay Star News has approached the Woolworths Group for comment.

Intrepid travelers Tom and Dustin have of course traveled the world over the course of their four-year relationship.

They furthermore enjoyed a belated honeymooned in Barcelona last year. They of course tied the knot in a lavish ceremony in Devon last May.

Check out pictures from the guys’ Spanish honeymoon here.

Finally, in other Dustin news, the Hollywood veteran and recently slammed commentator Katie Hopkins’ tweet about him and Tom being dads-to-be.