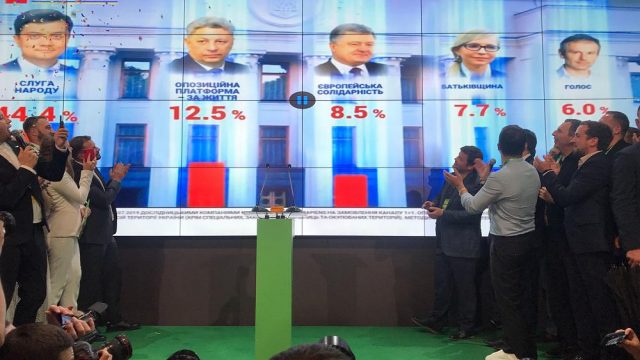 An early exit poll published by a Ukrainian NGO says Volodymyr Zelensky’s Servant of the People party is on course to win 44.4% percentage of the vote.

The party, which is led by Dmytro Razumkov, is on course to win the most seats in the Ukrainian parliament after Zelensky called a snap election following his inauguration as president in May.

Speaking to reporters after the exit poll was published, Razumkov predicted his party had won all of the constituencies in Kiev.

The Opposition Platform party – which calls for a restoration of ties with Russia – came second with 12.5% of the vote.

The poll by the Ilko Kucheriv Democratic Initiatives Foundation is based on voter surveys as of 6pm local time (5pm CEST).

Read more: Ukraine parliamentary election: what you need to know

If the early exit poll results prove accurate, Zelensky is likely to have confirmed his grip on power after his surprise victory against incumbent Poroshenko in the presidential run-off in April.

Zelensky, who shot to fame playing the president on Ukrainian television, won the second round run-off runoff with 73.2% of the vote despite having no political experience with an anti-corruption, anti-oligarch message.

Speaking on Sunday, Zelensky said he wants to invite the Voice party, headed by rock star Sviatoslav Vakarchuk, for talks about forming a governing coalition in parliament.

A senior member of the Voice party, which came fifth in the poll with 6%, separately said it was open to an alliance with new political forces provided they were not backed by oligarchs.