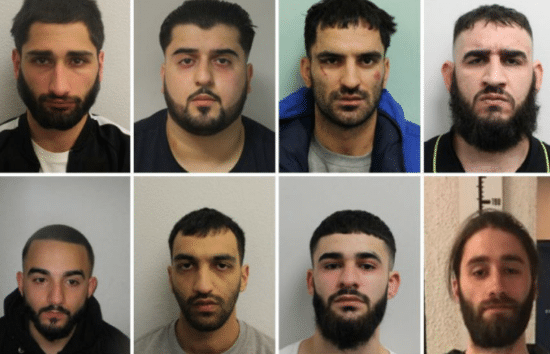 They stamped and kicked him as he curled up in a ball on the ground and covered his face.

The gang then beat up another man who had started filming the attack on his phone after leaving a club. The second victim’s friends intervened and a huge brawl erupted.

Onel then squired a corrosive acid substance from a plastic bottle into the second victim’s face and eyes.

The suspects then got into three cars and drove from the scene, shouting homophobic comments at members of the group, and claiming they ‘run Hackney’.

The attack did not take place outside Dalston Superstore, but around the corner in Shacklewell Lane. Club bosses said their venue had closed at 2.30am, two and a half hours before the attack.

Detective Constable David Leitner said: ‘Nine violent and dangerous men have been removed from London’s streets today and will now spend a lengthy time locked up in prison.

‘The level of violence used in this attack, coupled with the speed that this incident escalated, are truly shocking.

‘A group of people who were enjoying themselves at the end of a night out were subjected to a sustained and relentless wave of violence including the use of a corrosive substance – because they acted as good Samaritans to help a male being subjected to a vicious assault.

‘The original victim who was attacked by the group has never been traced but I hope he, and all those who were set upon by this violent group of individuals, will take some comfort from the fact that this group has been convicted.’