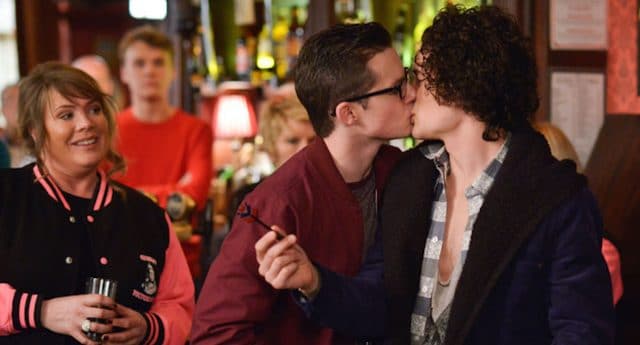 Fans of the long-running BBC soap EastEnders were shocked on Friday (May 31) when Ben Mitchell asked his mum, Kathy Beale, to include a dark room for sex in Albert Square’s new gay bar.

Ben said, “So what kind of gay are you aiming at? You’ve got to figure out who specifically you’re targeting otherwise it’ll just become another bland gay bar.”

“You’ve got loads of different tribes. You’ve got your bears, your cubs, your twinks, your muscle marys, your daddies…”

Kathy was confused at which segment of the LGBT+ market she should be marketing the new bar to.

Ben then asked, “Have you thought about a dark room?”

A dark room at a club is usually where people go to have sex.

Kathy was unsure what Ben meant, initially thinking that a dark room would be a place for photographers to hang out.

Eastenders’ new LGBT+ venue is called The Prince Albert. It will be the first permanent LGBT+ venue on the set of a UK soap.

Kathy was able to buy The Prince Albert – which is on the old site of The Albert – when she sold a necklace that Ben had given her.

Alongside the new gay bar, Albert Square is set to have its first Pride march this June. The move is meant to help the BBC show reflect London’s diversity more accurately.

The news comes as part of a move towards diversity and inclusion being made by Kate Oates, the new senior executive producer of the BBC show.

Of her move towards greater diversity on the show, Oates has previously said, “I’m really interested in bringing some more LGBTQ characters in. We’re looking at opening a gay bar on the Square which will be a cool precinct where gay and straight characters can all just hang out. ‘It should be something really exciting, really fun, really visual and feel really true to multi- cultural London.”