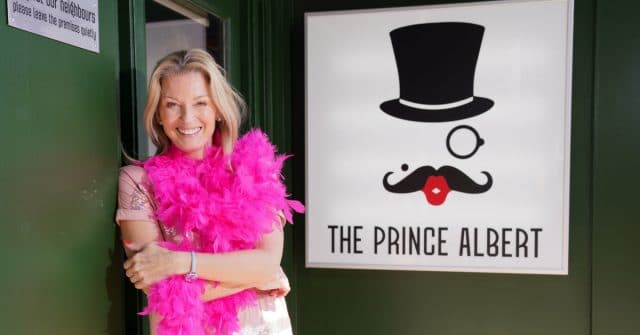 EastEnders fans are set to see a brand new gay bar open up in Walford – and the name has finally been revealed.

The BBC recently confirmed that Kathy Beale, played by Gillian Taylforth, would cash out an expensive necklace given to her by her son to open up an LGBT+ venue.

And now the name of the much-anticipated bar, which will be on the site of the old bar The Albert, has been confirmed.

Keen to overhaul the bar’s look and name, Kathy deliberates on what to call it and after some inspiration settles on The Prince Albert.

As Beale settles in behind the bar, only time will tell what drama will unfold on the dancefloor.

The bar will be on the site of The Albert (BBC)

The show’s new boss Kate Oates, who revamped ITV’s Coronation Street, said she was keen to point out that a gay kiss should not be considered “shocking television,” wants to add more LGBT+ characters, too.

“I’m really interested in bringing some more LGBTQ characters in,” she told The Sun.

“We’re looking at opening a gay bar on the Square which will be a super-cool precinct where gay and straight characters can all just hang out,” Oates continued.

“It should be something really exciting, really fun, really visual and feel really true to multicultural London.”

EastEnders first introduced a gay character—Colin Russell, played by Michael Cashman, in 1986. It was Colin who was first involved in the show’s first gay kiss, broadcasted 30 years ago.

The brief peck on the lips between Colin and his boyfriend Guido Smith (Nicholas Donovan) caused an uproar in 1989 Britain, where the government of Margaret Thatcher had recently introduced Section 28, a controversial law banning local authorities and schools from “promoting” homosexuality.

In the past three decades, several other LGBT+ characters came out on EastEnders. The show also tackled issues such as homophobic crime, which ended in tragedy the romance between the popular gay couple Ben Mitchell and Paul Coker.