Home Gay Life EastEnders will have its first ever Pride parade 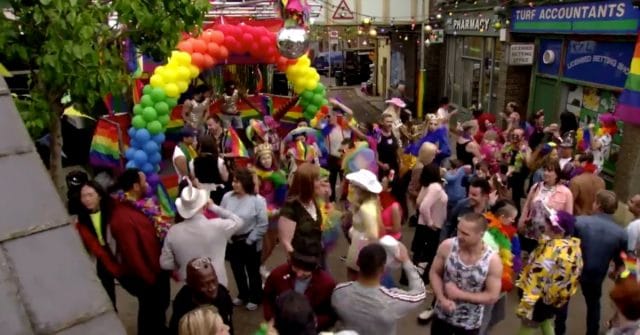 EastEnders revealed its first ever Pride parade in the soap’s summer trailer released on Thursday (June 6).

The trailer shows the rainbow-clad characters dancing through the streets of Walford, with long-running character Big Mo flashing people in gold hot pants.

The special Pride episode will air in early July to tie in with the real-life Pride in London on July 6.

A show source told The Sun: “It’s going to be a huge event on the square filled with joy … But, as with any event on Albert Square, there is certain to be plenty of drama happening alongside the celebration.”

It’s part of new producer Kate Oates’ plans to make the 34-year-old BBC soap more diverse, after EastEnders was previously accused of not being an authentic depiction of modern London.

The show got its first gay bar earlier this year and will be introducing more LGBT+ characters in future.

Oates, who joined EastEnders earlier this year after a stint on Coronation Street,told The Guardian: “I am … really interested in bringing some more LGBTQ characters in, and maybe we will have a new precinct for them as well.

“We are looking at opening a gay bar on the square, which will be a super-cool precinct where gay and straight characters can all just hang out and loads of stories can cross and should just be something really exciting, really fun, really visual and feel really true to multicultural London.

“Hopefully that will be something exciting for the next year.”

EastEnders made headlines in 1987 when it aired its first gay kiss between characters Colin Russell and Barry Clark. It was only a peck on the forehead but the scene was heavily criticised at the time.

Two years later a full mouth-to-mouth kiss attracted further controversy, and questions were asked in parliament about the appropriateness of such scenes.

A spokesperson for Stonewall said to The Sun: “It’s been more than 30 years since EastEnders featured the UK’s first on-screen same-sex kiss. So it’s great to hear Walford will be celebrating Pride.”