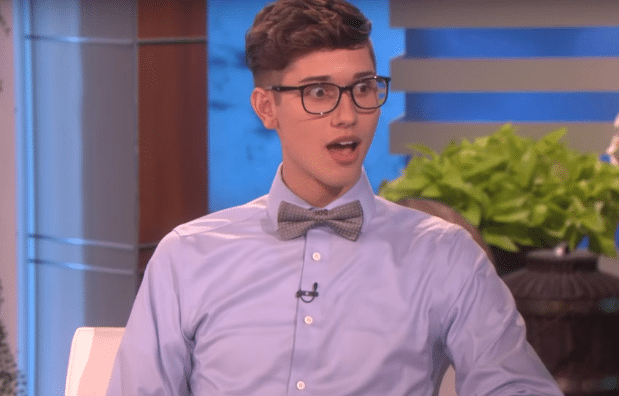 All the good feelings

Seth Owen, the gay valedictorian from Florida whose parents kicked him out, recently appeared on Ellen.

His story first surfaced in August and quickly went viral. His parents found out he was gay when he was a sophomore in high school and subsequently sent him to conversion therapy.

When he asked his parents if he could stop attending church, they gave him a choice: go to church or leave. Owen ended up leaving and staying with friends.

Despite 4.16 GPA, without his parents’ help, he wouldn’t be able to attend Georgetown University, his dream school. Then, generous strangers stepped in and helped raise over $140,000 for him to attend college.

This is the story he shared with Ellen today (11 September).

During their conversation, Owen revealed he’s still in contact with his parents. They haven’t let him return home, though.

‘I’m staying with — I call them madre and padre — my best friend’s family,’ he added. He stayed with them over the summer until he began school at Georgetown two weeks ago.

That story also got an extra happy ending, too.

After his story took off, Georgetown offered him a free ride to their school. With the money raised on GoFundMe, Owen said he would use it to create a scholarship for LGBTI students who also face obstacles like he did.

He told Ellen he’s loving the college experience so far. As Georgetown is a religious school, there are resident ministers on the dorm floors. Owen said his told him she was there to support him.

‘That’s what religion should do,’ Ellen said. ‘It should comfort you and support you for being the person that you are.’

Then it gets better.

Ellen presented Owen with a check for $25,000 to add to the scholarship he wants to start.