Home Gay Stars Ellen Page: Being in the closet hurt my career more than coming...

Ellen Page: “Being in the closet hurt my career more than coming out.”

Hollywood actor Ellen Page has said staying in the closet hurt her career more than coming out as gay did.

She initially said she was unsure whether Hollywood’s treatment of LGBT actors was improving.

“It’s hard for me to know — I’m not in rooms where people are making decisions of who to send what to, and the truth is, I’m absolutely not focusing on it.

She went on to say: “Being in the closet hurt my career way more than being out and being happy and feeling inspired again; being able to fuse my authentic self with my creative interests.”

Talking about the gay roles she has had the freedom to do since coming out, Page said sometimes people became fixated with her playing lesbian roles.

“The differences I see are these little things like, ‘oh, you’re doing this thing that’s gay and this thing that’s gay, so now you’re doing these [gay roles].’ I’m like, you would never bring that up with a straight person; you would not say, ‘oh, you’re doing another movie where you’re playing a straight person, are you a little worried about it?’ No judgment, I’m just saying these are the double standards, and this is the conversation that needs to change.”

The Freeheld star, who came out as a lesbian in 2014, fronts VICE’s new documentary series Gaycation – and travelled to some of the most homophobic places on earth alongside gay best friend Ian Daniel.

Thank you #sxsw for having @ianjamesdaniel and I. Grateful for such a wonderful conversation with #laurasydell about #gaycation and more ❤️?

After travelling to Brazil and confronting a policeman who brags about shooting gay people, Ellen and her best friend Ian Daniel have gone to Japan.

It isn’t the only time Page confronts a homophobe in the series – she attends a Pride parade in Jamaica despite the threats of violence, and challenges anti-LGBT Republican Ted Cruz, who later called her a “liberal fascist”.

In the latest episode of Viceland’s Gaycation, Page and Daniel check out the nightlife in Japan, as well as exploring some of the anti-LGBT laws and culture.

By the way, the second episode of Gaycation from Brazil is already available: 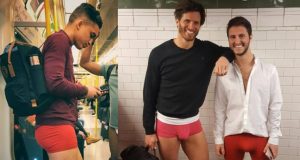 Nick Gayer
0
"I actually could watch this GIF forever." Adam Rippon and Gus Kenworthy have the gay Internet abuzz after locking lips at the 2018 GLAAD Awards...

Nick Gayer
0
The commercial's diversity has stirred many customers to call for a boycott. It’s turkey lurkey time for Tesco. As part of its #EveryonesWelcome campaign, the British...