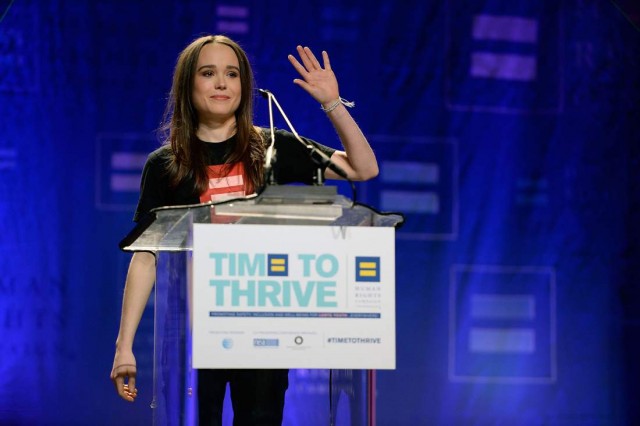 Making the news for the third time this week, Ellen Page tells straight Hollywood actors that it’s “not brave to play gay”. Just recently she took part in the first LGBT pride event in Jamaica, despite the fact that there were warnings of anti-gay protestors that could turn the parade violent at any moment. This also comes on the heels of her lively confrontation with Senator Ted Cruz (R-Texas) over his position on workplace protections for gay employees. But, according to Time Magazine, Ellen Page didn’t just claim straight actors whoplay gay roles were not brave, but that it was “borderline offensive”. Page went on to add that she, as a lesbian, would never be considered brave for playing a straight person in a Hollywood movie or TV show. “Nor should I be,” she carefully emphasized. In her speech she said that she has a hard time when people call actors brave for playing gay roles, even when they are straight. “I don’t really get that, because our job is to read something on a page,” she said. Page’s belief is that Americans are simply hungry for entertaining stories which feature all minorities, not just gays. To support her claims she cited the success of the Netflix show “Orange is the New Black”, stating it is clearly evident from what people decide to watch on television that they want to experience diversity. In her final comments she admitted that she wanted to see gay stories on television because she, herself, is gay – therefore she wants to connect to some reflection of her life through film. However, she also wants to see what it must be like to be a young Native person, an African American, or an African-Canadian, for example.